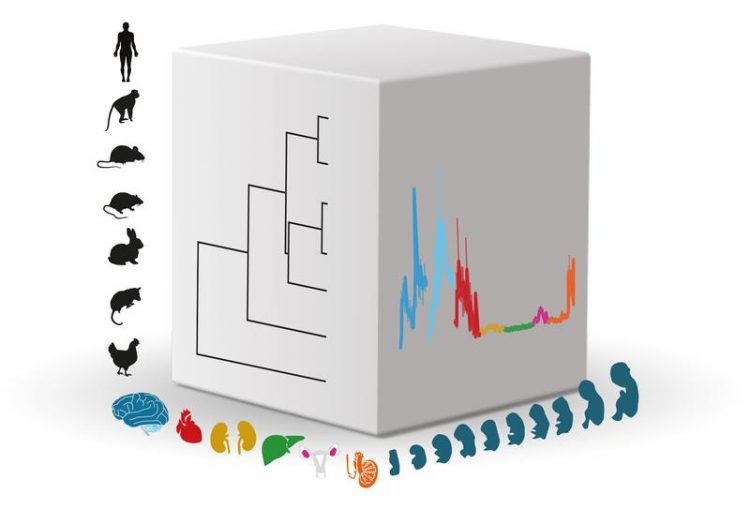 The research group of Prof. Dr. Henrik Kaessmann investigated the activity (expression) of genes across mammalian organ development. The figure (cube) illustrates the three main biological dimensions of the work: species, organs and developmental stages. The evolutionary relationships of species are indicated in a tree on the left frontal surface of the cube, while the expression of an exemplary gene across development in different organs is indicated on the right frontal surface. Source: Kaessmann research group

For the first time, researchers have decoded the genetic programmes that control the development of major organs in humans and other selected mammals – rhesus monkeys, mice, rats, rabbits, and opossums – before and after birth.

Their large-scale study demonstrated, among other things, that all the organs studied exhibit fundamental and original gene activity networks that must have originated early on in mammalian evolution more than 200 million years ago.

In a second large study, the scientists explored for the first time the developmental roles of a hitherto poorly understood but large category of genes, so-called RNA genes, which produce ribonucleic acids and not proteins, like “normal” genes.

A finely tuned and complex interaction of the activity of a large number of genes – also known as gene expression – controls development from a fertilised egg cell to an adult organism. Previously, the understanding of these essential genetic programmes in mammals was restricted to individual protein genes and specific organs or development phases. Furthermore, most previous work focused on the mouse.

“The genetic foundations that account for the differences in size, structure, and function of organs in different mammals were largely unknown,” says Prof. Dr Henrik Kaessmann, group leader of the “Functional evolution of mammalian genomes” research team at the Center for Molecular Biology of Heidelberg University (ZMBH).

To fully investigate the developmental programmes, the Kaessmann team turned to innovative high-throughput approaches. These next-generation sequencing technologies (NGS) enable analysing the expression of all genes in the respective genome at the same time. Using NGS, more than 100 billion expression fragments for both protein and RNA genes from various organs and mammals were read.

“This allowed us to quantify and compare the shifting gene activities over the course of development,” explain Dr Margarida Cardoso-Moreira and Ioannis Sarropoulos, the first authors of the two publications that describe the studies.

The bioinformatic analyses of the data were performed using high-powered computers at the Heidelberg University Computing Centre. They provided new insights into the genetic control of organ development in mammals.

The fundamental and original gene activity networks that the researchers discovered function similarly and determine key developmental processes in all the mammals studied, including humans. That means that these molecular networks already controlled organ development of early mammals 200 million years ago.

The researchers also found a surprisingly large number of genes whose activity patterns deviated significantly from one another in the various species of mammals. These differences, which arose during the course of evolution, explain the specific organ traits of the respective species. For the genes that control brain development, for example, the Heidelberg researchers were able to identify distinct expression patterns in humans.

The scientists also discovered that a surprisingly large number of RNA genes are involved in the control of organ development. Thus, this type of gene, which was previously difficult to characterise, plays an important role in mammalian development, emphasises Prof. Kaessmann.

In their large-scale studies, the ZMBH researchers identified a higher-level pattern in the sequence of the genetic programmes. Whereas they were still very similar in the early, i.e. prenatal, phase of organ development between all the mammals studied, they deviated more and more as time progressed. “The traits of the organs that characterise a species do not originate until later during development”, explains Prof. Kaessmann.

“Using modern molecular methods, we were able for the first time to confirm a groundbreaking hypothesis in biology from the 19th century.” The Baltic German naturalist Karl Ernst von Baer (1792 to 1876) discovered that the embryos of various species of mammal were increasingly difficult to differentiate the younger they were.

Researchers from China, Great Britain, Portugal, Russia, Sweden, Switzerland, and the United States contributed to the study. Funding was provided by the European Research Council, the Swiss National Science Foundation, and a Marie Curie grant from the European Union. The data are available in a public access database. The research results were published in “Nature”.

Caption:
The research group of Prof. Dr. Henrik Kaessmann investigated the activity (expression) of genes across mammalian organ development. The figure (cube) illustrates the three main biological dimensions of the work: species, organs and developmental stages. The evolutionary relationships of species are indicated in a tree on the left frontal surface of the cube, while the expression of an exemplary gene across development in different organs is indicated on the right frontal surface.
Source: Kaessmann research group