Nanorobots propel through the eye 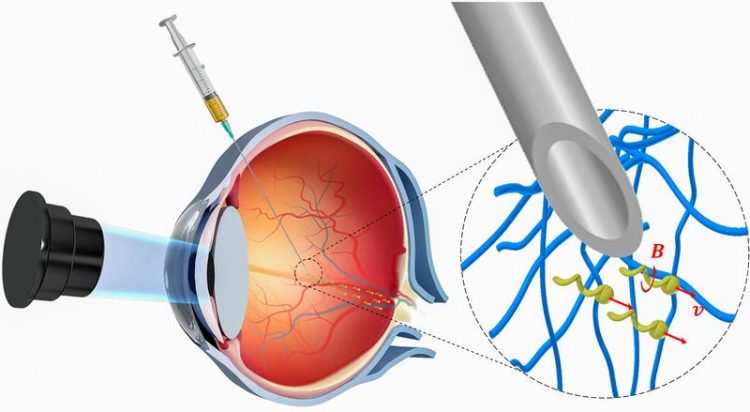 Researchers of the “Micro, Nano and Molecular Systems” Lab at the Max Planck Institute for Intelligent Systems in Stuttgart, together with an international team of scientists, developed propeller-shaped nanorobots that, for the first time, are able to drill through dense tissue as is prevalent in an eye.

They applied a non-stick coating to the nanopropellers, which are only 500 nm wide – exactly small enough to fit through the tight molecular matrix of the gel-like substance in the vitreous. The drills are 200 times smaller than the diameter of a human hair, even smaller than a bacterium´s width.

Their shape and their slippery coating enable the nanopropellers to move relatively unhindered through an eye, without damaging the sensitive biological tissue around them. This is the first time scientists were able to steer nanorobots through dense tissue, as so far, it has only been demonstrated in model systems or biological fluids.

The researchers´ vision is to one day load the nanopropellers with drugs or other therapeutic agents and steer them to a targeted area, where they can deliver the medication to where it is needed.

Targeted drug delivery inside dense biological tissue is very challenging, especially at these small scales: Firstly, it is the viscous consistency of the inside of the eyeball, the tight molecular matrix which a nanopropeller has to squeeze through.

It acts as a barrier and prevents the penetration of larger structures. Secondly, even if the size-requirements are fulfilled, the chemical properties of the biopolymeric network in the eye would still result in the nanopropeller getting stuck in this mesh of molecules. Imagine a tiny cork-screw making its way through a web of double-sided adhesive tape. And thirdly there is the challenge of precise actuation.

This latter the scientists overcome by adding a magnetic material, like iron, when building the nanopropellers, which allows them to steer the drills with magnetic fields to the desired destination. The other obstacles the researchers overcome by making each nanopropeller not larger than 500 nm in size, and by applying a two layered non-stick coating.

The first layer consists of molecules bound to the surface, while the second is a coating with liquid fluorocarbon. This dramatically decreases the adhesive force between the nanorobots and the surrounding tissue.

“For the coating we look to nature for inspiration”, the first author of the study Zhiguang Wu explains. He was a Humboldt Research Fellow at the MPI-IS and is now a postdoc at the California Institute of Technology. “In the second step, we applied a liquid layer found on the carnivorous pitcher plant, which has a slippery surface on the peristome to catch insects. It is like the Teflon coating of a frying pan. This slippery coating is crucial for the efficient propulsion of our robots inside the eye, as it minimizes the adhesion between the biological protein network in the vitreous and the surface of our nanorobots.”

“The principle of the propulsion of the nanorobots, their small size, as well as the slippery coating, will be useful, not only in the eye, but for the penetration of a variety of tissues in the human body”, says Tian Qiu, one of the corresponding authors of the paper, and who is a group leader in the “Micro, Nano and Molecular Systems” Lab at the MPI-IS.

Both Qiu and Wu are part of an international research team that worked on the publication with the title “A swarm of slippery micropropellers penetrates the vitreous body of the eye”. Also, the University of Stuttgart, the Max Planck Institute for Medical Research in Heidelberg, the Harbin Institute of Technology in China, Aarhus University in Denmark and the Eye Hospital of the University of Tübingen contributed to the groundbreaking work.

It was at the eye hospital, where the researchers tested their nanopropellers in a dissected pig´s eye and where they observed the movement of the propellers with the help of optical coherence tomography, a clinical-approved imaging technique widely used in the diagnostics of eye diseases.

Across the eye towards the retina

With a small needle, the researchers injected tens of thousands of their bacteria-sized helical robots into the vitreous humour of the eye. With the help of a surrounding magnetic field that rotates the nanopropellers, they then swim towards the retina, where the swarm lands.

Being able to precisely control the swarm in real-time was what the researchers were aiming for. But it doesn´t end here: the team is already working on one day using their nano-vehicles for targeted delivery applications. “That is our vision”, says Tian Qiu. “We want to be able to use our nanopropellers as tools in the minimally-invasive treatment of all kinds of diseases, where the problematic area is hard to reach and surrounded by dense tissue. Not too far in the future, we will be able to load them with drugs.“

For the Stuttgart scientists, this is not the first nanorobot they have developed. For several years now, they have been creating different types of nanorobots using a sophisticated 3D manufacturing process developed by the “Micro, Nano and Molecular Systems” research group led by Professor Peer Fischer. Billions of nanorobots can be made in only a few hours by vaporizing silicon dioxide and other materials, including iron, onto a silicon wafer under high vacuum while it turns. This is how the helix structure is created. See the video explaining the fabrication technique:
https://www.youtube.com/watch?v=XCTPWW7XSS0

Dr. Zhiguang Wu obtained his doctoral degree in Chemical Engineering and Technology at Harbin Institute of Technology, China, in 2015. Between 2013 and 2015, he was a visiting student in the department of Nanoengineering at the University of California, San Diego. Wu was a Humboldt Research Fellow and a postdoctoral researcher at the Max Planck Institute for Intelligent Systems in the “Micro, Nano and Molecular Systems” lab and is now a postdoc at Caltech, the California Institute of Technology.

Dr. Tian Qiu is group leader of the Biomedical Microsystems Group in the “Micro, Nano and Molecular Systems” lab at the Max Planck Institute for Intelligent Systems in Stuttgart. He received a Ph.D. from Ecole Polytechnique Fédérale de Lausanne (EPFL), Switzerland. He serves as an associated fellow of the Max Planck-ETH Center for Learning Systems, and an instructor for the International Max Planck Research School for Intelligent Systems (IMPRS-IS). He won the National Award for Outstanding Self-financed Chinese Students Abroad and the Best Microrobot Design Award at Hamlyn Symposium on Medical Robotics.

Prof. Dr. Peer Fischer heads the “Micro, Nano and Molecular Systems” research group at the Max Planck Institute for Intelligent Systems in Stuttgart and he is a Professor of Physical Chemistry at the University of Stuttgart. He was a Rowland Fellow at Harvard University. Prof. Fischer received an ERC starting grant, won a World Technology award, and he holds an ERC Advanced Grant. He is a Fellow of the Royal Society of Chemistry.