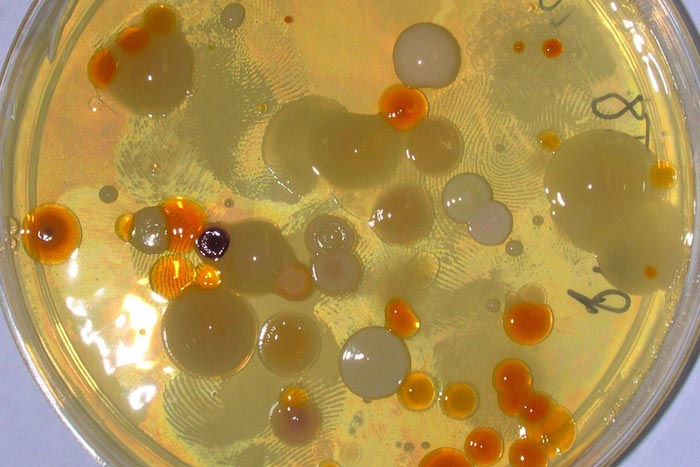 A photo of bacteria in a petri dish observed by Indiana University professor Jay T. Lennon and his lab.
Photo courtesy of Jay T. Lennon

A study of microbial populations under a prolonged period of starvation by Indiana University professor Jay T. Lennon and his laboratory could help researchers answer questions pertaining to chronic infections, the functioning of bacteria in the environment and the persistence of life itself.

In a paper published online Aug. 12 by the Proceedings of the National Academy of Sciences of the United States of America, Lennon and his colleagues explain their study of about 100 populations of different bacteria in closed systems, which had no access to external food for 1,000 days. The team tracked how long they survived, and almost all of them persisted.

“The larger question of how bacteria survive long periods of energy limitation is relevant to understanding chronic infections in humans and other hosts, and is related to how some pathogens tolerate drugs like antibiotics,” said Lennon, a professor in the Department of Biology in the College of Arts and Sciences.

Many bacterial infections are difficult to treat, in part, because drugs are often designed to target the cellular machinery of metabolically active cells. Energy-limited bacteria often enter a quiescent, or dormant, state that makes them less sensitive to drug treatments, Lennon said. Not only can the pathogens persist under such conditions, the populations can also evolve antibiotic resistance, making the problem worse.

Microbes also play an important role in the environment. The bacteria in the study came from agricultural soils. In those habitats, Lennon said, microbes form symbiotic relationships with plants, and they carry out processes that are essential for the functioning of ecosystems, such as carbon sequestration, nutrient cycling and greenhouse gas emissions.

A major and unresolved question is how billions of microbial cells and thousands of microbial taxa coexist in a single gram of soil, often under harsh environmental conditions. One explanation supported by the research is that microbes seem to be well-adapted to feast-or-famine conditions, where resources can be in short supply for extended periods. This may help explain how complex microbial communities are maintained over time.

In the study, Lennon and his colleagues estimated that bacteria, which are the fastest-reproducing organisms on the planet, can also be extremely long-lived. Lennon and his team, including former Indiana University doctoral student William Shoemaker, estimated that energy-limited bacteria can have lifespans that rival, and in some cases exceed, those of plants and animals. The study used survival analyses to estimate that some populations have extinction times of up to 100,000 years.

“Obviously, these predictions extend far beyond what can be measured,” Lennon said, “but the numbers are consistent with the ages of viable bacteria that have been recovered from ancient materials, such as amber, halite crystals, permafrost and sediments at the bottom of the deepest oceans.”

The persistence of microbes under such conditions likely involves dormancy and other mechanisms that conserve energy. For example, Lennon and colleagues found that the survival of cells in their closed system was sustained by the ability of bacteria to “scavenge” their dead relatives.

Under these lean conditions, where cells must eke out a living on vanishingly small quantities of food, Lennon and his team were curious about the potential for bacteria to evolve. They identified genes that were under negative selection, but also signatures of positive selection, which indicate cryptic growth that allowed new mutations to increase in frequency. This finding suggests that the recycling of dead cells has the potential to fuel adaptive evolution. Such observations are relevant for understanding the constraints on fundamental biological processes given that large swaths of the planet are energy limited.

This work was funded by the National Science Foundation, the U.S. Army Research Office and the National Aeronautics and Space Administration.