How malnutrition leads to inflamed intestines 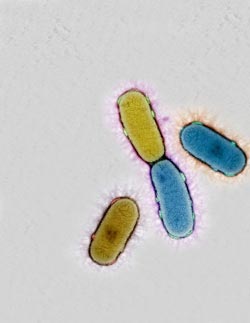 This surprising result explains food effects that have been known for centuries and provides a molecular link between malnutrition and the bacteria which live in our intestines. The results will be published on 26 July 2012 in the journal Nature.

More than one billion people in poor countries are starving, and malnutrition remains a major problem even in rich countries, making it a leading cause of death in the world. For over a hundred years, doctors have known that a lack of protein in the diet or low levels of amino acids, the building blocks of proteins, can lead to symptoms like diarrhoea, inflamed intestines and other immune system disorders, which weaken the body and can be fatal. However, the molecular mechanism which explains how malnutrition causes such severe symptoms has been largely unexplored.

Now a research group led by Josef Penninger, the director of the Institute of Molecular Biotechnology (IMBA) in Vienna, Austria, in cooperation with Philip Rosenstiel, University of Kiel, Germany, has found a molecular explanation for the increased susceptibility to intestinal inflammation in malnutrition. The researchers were studying an enzyme which helps to control blood pressure, kidney failure in diabetes, heart failure and lung injury, called the Angiotensin Converting Enzyme 2, or ACE2. This enzyme was identified as the key receptor for SARS virus infections, but the researchers also discovered an entirely new function. ACE2 controls the way our intestines take in amino acids from our food, via amino acid transporters, and in particular the uptake of the essential amino acid tryptophan.

Too little tryptophan alters our natural immune system, which changes the types of bacteria which can live in our bowels and guts, leading to higher sensitivity and eventually diarrhoea and inflamed intestines. Increasing the intake of tryptophan in their diet provided relief for mice suffering from intestinal inflammation. The mixture of bacteria returned to normal, the inflammation died down, and the mice also became less susceptible to new attacks.

“The research shows how the food we eat can directly change the good bacteria in our intestines to bad bacteria and so influence our health”, says Thomas Perlot, the first author of the study. “Our results might also explain nutritional effects that have been known for centuries and provide a molecular link between malnutrition and the bacteria living in our intestines. This discovery could be used in the future to treat patients with a simple regulated diet or by taking tryptophan as a food supplement. And there is hardly any risk of side effects from artificially increasing an amino acid found in the normal diet.”

Josef Penninger, the lead author, says “I have studied ACE2 for more than 10 years and was completely stunned by this novel link between ACE2 and amino acid balance in the gut. Biology continues to surprise me. Up to a billion people in the world are malnourished, especially the poor and disadvantaged. In Austria alone, around 80,000 people suffer from a chronic inflammatory bowel disease like ulcerative colitis or Crohn's disease. I hope that our findings have opened a door to a better molecular understanding how malnutrition affects human health. Whether simple tryptophan diets can indeed cure the effects of malnutrition in humans now needs to be carefully tested in clinical trials.”

The paper “ACE2 links amino acid malnutrition to microbial ecology and intestinal inflammation” will be published on July 26 in “Nature”.

IMBA:
The Institute for Molecular Biotechnology (IMBA) combines fundamental and applied research in the field of biomedicine. Interdisciplinary research groups address functional genetic questions, particularly those related to the origin of disease. IMBA is a subsidiary of the Austrian Academy of Sciences, the leading organization promoting non-university academic basic research in Austria.