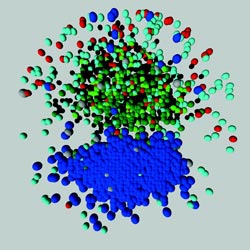 An organism's ability to make new antibodies and use them to optimize its own immune defenses is of central importance in the fight against pathogens. In the case of severe infections, the overall relative speed with which an immune response proceeds could mean the difference between life and death.

An international team of scientists, among them systems immunologist Prof. Michael Meyer-Hermann of the Helmholtz Centre for Infection Research (HZI) of Braunschweig, Germany, has now found that asymmetric division of antibody-producing B cells speeds up the body's immune defenses.

Early on, one daughter cell starts making antibodies while the other works at refining its own antibodies. The researchers' findings are due to be published in the upcoming issue of the scientific journal, Cell Reports.

Our immune system produces antibodies as effective long-term weapons against viral or bacterial infections or following vaccination. Antibodies are made in lymph nodes by specialized cells called B lymphocytes. In certain areas within a lymph node – called germinal centers – these B cells first undergo a process of selection.

B cells proliferate, mutate, and thereby change their antibodies. The immune system then checks to make sure whether or not these mutations translate into an improved immune response. If so, the cells in question are selected. The final outcome is the production of optimized antibodies capable of efficiently attaching to a particular pathogen and thereby inactivating it or labeling it for subsequent destruction by phagocytic scavenger cells.

“As part of this evolutionary process, the immune system takes turns between chance mutations and best-candidate-selection,” explains Michael Meyer-Hermann, Director of the HZI’s Department of Systems Immunology and professor of systems biology at the Technische Universität Braunschweig. “We are calling it the 'recycling hypothesis'.” All of this allows the immune system to make sure that any antibody it produces is maximally effective against the particular pathogen it is looking to fight.

A year and a half ago, an international team of New York-based and HZI researchers described this process of antibody optimization experimentally in great detail. However, up until now, the nature of the trade-off relationship between mutation and selection was unclear. “There has been a lot of debate about whether or not one should picture this process as a one-way street or as a roundabout,” says Meyer-Hermann. As the study's first author, Meyer-Hermann has analyzed his colleagues' experimental results mathematically and determined that the earlier measurements are only compatible with the idea of a roundabout.

At the beginning of the year, a team of British researchers from London showed that B cell division is asymmetric, resulting in production of unequal daughter cells. At first, the purpose of this kind of asymmetric cellular division seemed uncertain. Meyer-Hermann's analyses suggest that one of the two daughter cells leaves the germinal center and starts producing antibodies while the other stays behind and undergoes another round of mutation and selection inside the germinal center. The mathematical model illustrates the advantage of this type of set-up. While one fairly specialized daughter cell is already making antibodies, its clone, which can be further optimized in the next round, stays behind. Compared with symmetric division, in asymmetric division there is a tenfold increase in the number of antibodies produced. In addition, the cell that stays behind in the germinal center stores information regarding a successful antibody it has produced, and the optimization process thus concludes more quickly. “This kind of time-saving in antibody production can be a real life-saver in the case of a dangerous infection,” explains Michael Meyer-Hermann.

At the Helmholtz Centre for Infection Research in Braunschweig, scientists study microbial virulence factors, host-pathogen interactions and immunity. The goal is to develop strategies for the diagnosis, prevention and therapy of human infectious diseases.

The Department of Systems Immunology of the HZI, led by Prof. Michael Meyer-Hermann, addresses the mathematical modelling of immunological questions. It is part of the Braunschweig Integrated Centre for Systems Biology (BRICS), a joint research centre for systems biology founded by the HZI and the Technische Universität Braunschweig.