Home / Life Sciences and Chemistry / Chronic inflammation in the brain leads the way to Alzheimer&#039;s Disease
02.07.2012

Chronic inflammation in the brain leads the way to Alzheimer&#039;s Disease 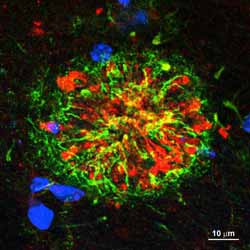 In mice genetically modified to produce the human version of Aß (green), the viral-like challenge drastically increased the amount of Aß at precisely the sites of inflammation-induced APP deposits (red). picture: UZH<br>

To date it has been difficult to pin down the role of inflammation in Alzheimer's disease (AD), especially because trials of NSAIDs appeared to have conflicting results.

Although the ADAPT (The Alzheimer's Disease Anti-inflammatory Prevention Trial) trial was stopped early, recent results suggest that NSAIDs can help people with early stages of AD but that prolonged treatment is necessary to see benefit.

Researchers from the University of Zurich, in collaboration with colleagues from the ETH Zurich and University of Bern investigated what impact immune system challenges (similar to having a severe viral infection) would have on the development of AD in mice. Results showed that a single infection before birth (during late gestation) was enough to induce long-term neurological changes and significant memory problems at old age.

These mice had a persistent increase in inflammatory cytokines, increased levels of amyloid precursor protein (APP), and altered cellular localization of Tau. If this immune system challenge was repeated during adulthood the effect was strongly exacerbated, resulting in changes similar to those seen for pathological aging.

Dr Irene Knüsel who led this research explained, “The AD-like changes within the brain of these mice occurred without an increase in amyloid ß. However, in mice genetically modified to produce the human version of Aß, the viral-like challenge drastically increased the amount of Aß at precisely the sites of inflammation-induced APP deposits. Based on the similarity between these APP/Ab aggregates in mice and those found in human AD, it seems likely that chronic inflammation due to infection could be an early event in the development of AD.”