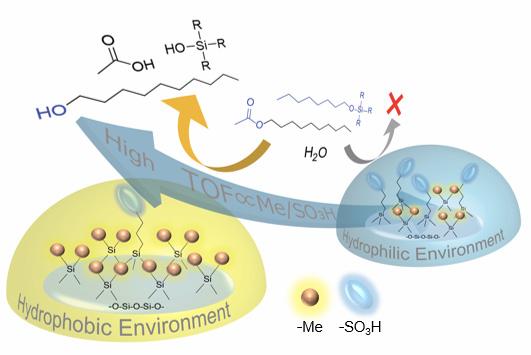 Researchers from Tokyo Metropolitan University have shown that the tunable hydrophobic nature of dense siloxane gels is strongly correlated with their catalytic activity, explicitly demonstrating how molecules with different hydrophobic nature at the molecular level interact differently with surfaces of differing hydrophobicity. This is also the first time a siloxane gel has been shown to be highly effective for the reaction of silyl ethers, commonly used as a protecting agent.

The word hydrophobic comes from ancient Greek, “hydro” for water and “phobia” for fearing (opposite of hydrophilic). Thus, a hydrophobic material is one which repels water; household examples include coatings for non-stick frying pans and smartphones.

Hydrophobicity also plays a key role in nature, for example, how certain plants and animals harvest water from the atmosphere, and how long strands of DNA are efficiently packed into chromosomes. In recent years, it has also been revealed to be part of the function of acid catalysts, acidic materials which can speed up chemical reactions, widely used in the petrochemical industry.

Though it was widely known that more hydrophobicity led to better catalysis, it was not clear why this was the case, due to the heterogeneous porous structure of the most common catalysts.

Thus, a group of researchers led by Dr Hiroki Miura and Prof Tetsuya Shishido from Tokyo Metropolitan University studied the catalytic activity of a dense siloxane gel, a kind of silicone rubber, with acidic sulfo groups attached. Importantly, these gels can be covered with controlled amounts of both acid groups and hydrophobic methyl groups, enabling fine control of hydrophobicity. These gels are also not porous, presenting a surface which is covered in only two key groups, allowing for simpler but more accurate quantitation of surface environment.

The group studied catalysis of the hydrolysis (bond breakage with water) of alkyl acetates, commonly used for producing paints, fragrances, and even plastics; they found that acetates with longer, more hydrophobic tails in their molecular structure benefited from increased catalysis with a lower sulfo-to-methyl ratio. On the contrary, less hydrophobic molecules were catalysed less effectively due to less available sulfo groups. They clearly demonstrate how the affinity of water to catalysis sites can hinder the approach of different molecules; this may be leveraged to engineer both selectivity and increased activity.

Furthermore, the siloxane catalyst was applied to the deprotection of silyl ethers. Silyl ethers are protecting groups, attached to groups which need shielding from unwanted reactions. In order to make them available again, they must be readily deprotected. The group showed, for the first time, that siloxane gel catalysts are highly effective in deprotecting silyl ethers, a key reaction step in common reactions such as the construction of artificial nucleotides (or DNA). With more understanding of how molecular environment is tied to function, they hope that further chemical enhancements to these catalysts may open the way to new functions and applications.