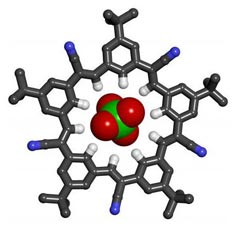 The molecule, which the researchers call cyanostar, was developed in the lab of Amar Flood, associate professor in the Department of Chemistry in the College of Arts and Sciences. It is described in an article in the journal Nature Chemistry, scheduled for publication in August and available online.

“Macrocycles have been at the heart of molecular recognition experiments in recent years,” Flood said. “But they're a dime a dozen. To make a contribution, you have to raise the bar.”

Cyanostar raises the bar not only because it is easy to make, but for its unprecedented ability to bind with large, negatively charged ions, suggesting potential applications ranging from environmental remediation of perchlorate and molecular sensing of biological phosphates, to processes related to the life cycle of lithium ion batteries.

The creation follows from earlier work in Flood's lab showing that organic molecules could be designed to remove negatively charged ions from solutions. While the molecules have a neutral charge overall, their structure causes them to exhibit electro-positive properties and bind with weakly coordinating anions that were once thought to be incapable of being captured by molecular receptors.

Flood challenges graduate students to generalize the previous discovery of strong CH hydrogen bonds by creating molecules with similar yet complementary properties. In response, Semin Lee proposed using the cyanostilbene molecule as a building block for a new macrocycle — a cyclic macromolecule with the capacity to bind ions. After false starts, he designed cyanostar, with a structure that resembles a five-pointed star.

A cross-section of the crystalline structure of cyanostar resembles the five-sided figures that Albrecht Durer showed in 1525 could be “packed” to tile a two-dimensional surface with periodic patterns. The form of the molecule and its fivefold symmetry are suggestive of Penrose tiles, geometrical forms that mathematicians have investigated in recent decades, and of quasicrystals, ordered arrays of atoms and molecules whose discovery in the 1980s changed the field of materials chemistry.

While chemists have created countless macrocycles, cyanostar is unusual in that it can be synthesized in a “one pot” process, without multiple, time-consuming steps. It is also atypical in that the synthesis produces high yields of over 80 percent, even as the quantity being produced increases to about 10 grams.

“That's quite unique,” Flood said. “Normally, when you increase the amount of material you add to the reaction, the yield just drops off.”

Shaped like shallow bowls, the molecules have a strong affinity for binding with large anions such as certain borate, chlorate and phosphate ions. The molecules bind in 2-to-1 sandwich-shaped complexes, with the anion sandwiched between two saucer-like cyanostars.

In addition to demonstrating its binding ability, the chemists showed cyanostar can be assembled into a dialkylphosphate rotaxane, a wheel-on-axle assembly in which a pair of macrocycles is threaded with a molecular rod, which is then capped on both ends by a “stopper.” Rotaxanes are precursors of molecular machines and motors. Some can be manipulated — for example, by applying light or heat — to serve as chemical switches or to accomplish other types of work at the molecular level.

Support for the research came from the National Science Foundation (NSF/CHE-0844441). Funding for equipment used in the analysis is from NSF and the U.S. Department of Energy. To speak with Flood, please contact Steve Hinnefeld, IU Communications, 812-856-3488 or slhinnef@iu.edu.