Immunotherapy kicks and kills HIV by exploiting a common virus 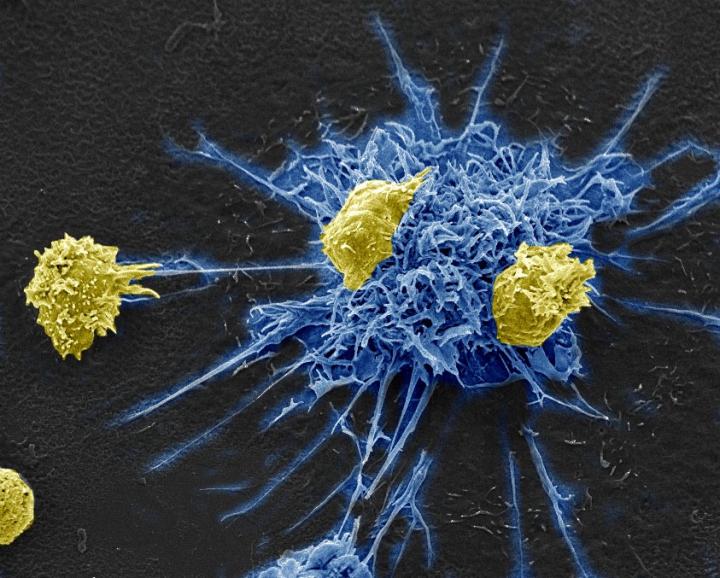 The discovery, made in the laboratory using cells from people with HIV, is yet to be tested in clinical trials, but could lead to the development of a vaccine that would allow people positive for HIV to stop taking daily medications to keep the virus in check.

“A lot of scientists are trying to develop a cure for HIV, and it's usually built around the 'kick and kill' concept – kick the virus out of hiding and then kill it,” said senior author Robbie Mailliard, Ph.D., assistant professor of infectious diseases and microbiology at Pitt Public Health. “There are some promising therapies being developed for the kill, but the Holy Grail is figuring out which cells are harboring HIV so we know what to kick.”

Antiretroviral therapy (ART) typically controls HIV infections so well that the virus is virtually undetectable in the blood and cannot easily infect other people. But if a person with HIV stops taking the daily regimen of medications, which come with many side-effects, the virus can rage back and turn into full-blown AIDS.

This is because the virus goes into a latent, inactive phase where it incorporates itself into the DNA of certain immune cells called “T helper cells,” and lurks while a person is taking ART.

Mailliard and his team decided to look at a different virus that also goes latent and infects more than half of adults – and 95 percent of those with HIV: Cytomegalovirus (CMV), which can cause eye infections and other serious illnesses, but is usually controlled by a healthy immune system.

“The immune system spends a lot of time keeping CMV in check; in some people, 1 one out of every 5 T cells are specific to that one virus,” said co-author Charles Rinaldo, Ph.D., professor and chair of Pitt Public Health's Department of Infectious Diseases and Microbiology. “That got us thinking – maybe those cells that are specific to fighting CMV also make up a large part of the latent HIV reservoir. So we engineered our immunotherapy to not only target HIV, but to also activate CMV-specific T helper cells.”

To run the experiment, the team needed blood – and lots of it – from people with HIV controlled by ART. Nearly two dozen participants stepped up from the Pitt Men's Study, the Pittsburgh site of the Multicenter AIDS Cohort Study (MACS), a research study of the natural history of treated and untreated HIV/AIDS in men who have sex with men.

“The MACS participants were vital to the success of this study,” said first author Jan Kristoff, M.S., a doctoral candidate at Pitt Public Health. “You have to collect a lot of blood to find T cells latently infected with functional HIV in people on ART – it could be as few as 1 out of every 10 million cells. So the men would sit for as long as four hours hooked up to a machine that processed their blood and came back multiple times to give more samples.”

In addition to the T helper cells, Kristoff also isolated immune cells called dendritic cells, which Mailliard describes as the quarterbacks of the immune system: “They hand off the ball and dictate the plays, telling other immune cells where to go and what to fight.”

Dendritic cells are key to cancer immunotherapies, and Mailliard previously worked on a team developing such a therapy being used to treat melanoma. Conventional dendritic cells also have been used to induce the immune system to kill HIV. But they hadn't yet been exploited to “kick,” or pull latent HIV out of hiding in the body. In this study, the team engineered “antigen-presenting type 1-polarized, monocyte-derived dendritic cells” (MDC1) that were primed in the lab to seek out and activate CMV-specific cells, with the thinking that they also may contain latent HIV.

When the MDC1 were added back to T helper cells containing latent HIV, they reversed that latency as expected, kicking the virus out of hiding. And then the big test came.

“Without adding any other drug or therapy, MDC1 were then able to recruit killer T cells to eliminate the virally infected cells,” Mailliard said. “With just MDC1, we achieved both kick and kill – it's like the Swiss Army knife of immunotherapies. To our knowledge, this is the first study to program dendritic cells to incorporate CMV to get the kick, and also to get the kill.”

The team is now pursuing funding to begin clinical trials to test this property of MDC1 in humans.

To read this release online or share it, visit http://www.upmc.com/media/news/040319-kristoff-mailliard-mdc1.

About the University of Pittsburgh Graduate School of Public Health

The University of Pittsburgh Graduate School of Public Health, founded in 1948 and now one of the top-ranked schools of public health in the United States, conducts research on public health and medical care that improves the lives of millions of people around the world. Pitt Public Health is a leader in devising new methods to prevent and treat cardiovascular diseases, HIV/AIDS, cancer and other important public health problems. For more information about Pitt Public Health, visit the school's Web site at http://www.publichealth.pitt.edu.