How we decide on where to go 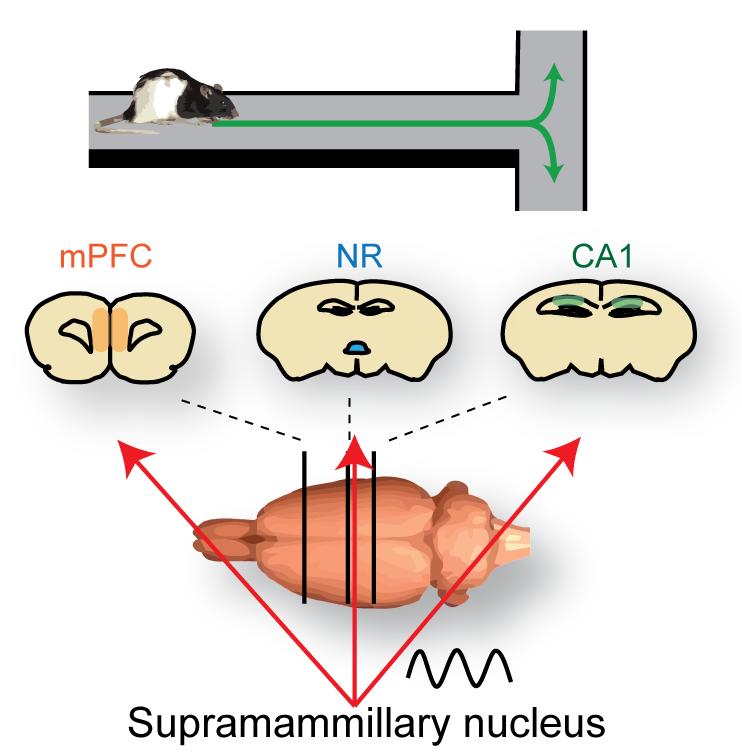 The prefrontal-thalamo-hippocampal circuit is involved when a rat makes a choice of the next trajectory at the upcoming T-junction and the supramammillary nucleus facilitates transfer of information. Max Planck Institute for Brain Research

Route planning is a key element for spatial navigation. Neurons in the hippocampus and surrounding structures, such as place cells or grid cells, become active depending on the animal’s instantaneous position, and are considered part of internal maps in the brain.

However, the information from these neurons is not sufficient for goal-directed navigation. To determine the next move toward a destination, these maps must interact with action planning systems in different cortical areas.

Hiroshi Ito, research group leader at the Max Planck Institute for Brain Research, not only has identified the prefrontal-thalamo-hippocampal circuit involved in this process, but has also provided proof for the communication mechanism between the brain areas, pointing to the supramammillary nucleus as a mediator to all three structures. He published his results in the latest issue of Neuron.

Finding our way to an unknown or even known location is a challenge we face nearly every day. In order to successfully navigate, we not only need to be aware of our current location and map our surrounding, but also need to decide which way to go. Besides humans, a wide range of other species from the animal kingdom, including mammals, need to make this choice.

While 2014 Nobel Laureates John O’Keefe, as well as May-Britt Moser and Edvard Moser have identified the so-called place cells and grid cells in the mammalian cortex to determine the position in a specific environment, information about the brain areas and mechanism which facilitate the decision to take the correct route to the destination is still under investigation.

Previous work by Hiroshi Ito at the Moser’s Lab already identified a neural circuit that functionally links between the brain’s spatial representation system in the hippocampus and the action planning system in the prefrontal cortex. The neuroscientists found that a thalamic nucleus works as a connecting link between the prefrontal cortex and the hippocampus.

The prefrontal-thalamo-hippocampal circuit allows transfer of information about the next route plans from the prefrontal cortex to the hippocampus. As animals need to cope with changing behavioral demands, multiregional interactions in the brain should be accordingly dynamic. The underlying mechanism for the communication between the three-fold connections has not been elucidated up till now.

Ito and colleagues now provide proof that cortical synchrony is a key mechanism for behavior-dependent functional coupling in the prefrontal-thalamo-hippocampal circuit. Hiroshi Ito: “The key idea of cortical synchrony for dynamic cortical interactions dates back from the 1980s and was proposed by my respected colleague Wolf Singer. In accordance with his theory, we found enhancement of spike-time coordination at the theta frequency band (6-12 Hz) in the prefrontal-thalamo-hippocampal circuit whenever the rodents were required to choose a next movement direction at a T-junction of our maze.”

The prefrontal cortex, the thalamic nucleus reuniens, and the hippocampus are however anatomically quite distant from each other, which raises a question of how these structures can interact in an efficient way. The authors found that neurons in the supramammillary nucleus fire at the theta rhythm and give rise to inputs in all three structures of the circuit. “We could even proof the importance of this structure when we deactivated the supramammillary nucleus via optogenetics. Theta-rhythm spike coordination was then impaired, which resulted in failure of communication from the prefrontal cortex to the hippocampus about the next route.”, Ito says.

Researchers now could shed light on how route decision-making in the mammalian brain is coordinated and how closely these three brain areas work together. Ito says: “Spike-time coordination, or synchrony, is likely the key mechanism for gating signal flow between brain regions, controlling operations of the cortex for flexible behaviors of animals.