Home / Life Sciences / How the environment and the microbiome jointly shape the body
27.08.2020

How the environment and the microbiome jointly shape the body 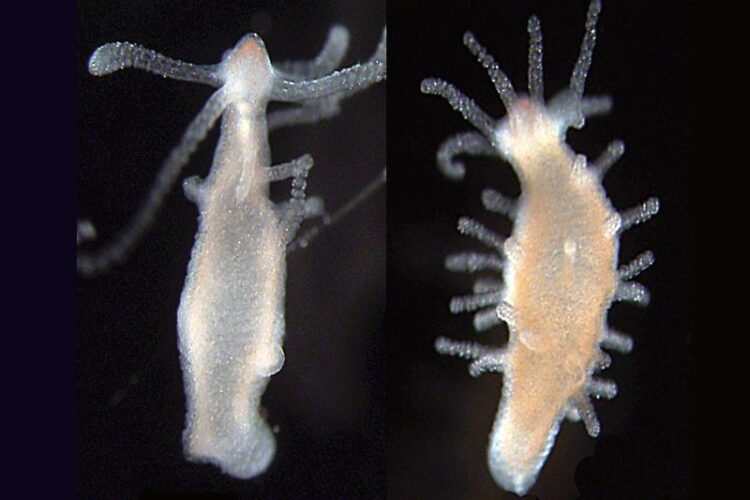 The experiments showed that animals with a normal microbiome (left) showed fewer tentacles than their sterilized conspecifics.

All multicellular living beings are colonized by an unimaginably large number of microorganisms and have developed together with them from the very beginning of multicellular life. The natural microbiome, i.e. the totality of these bacteria, viruses and fungi that live in and on a body, is of fundamental importance for the entire organism: it supports, for example, the absorption of nutrients or fends off pathogens.

The individual development of a living being, on the other hand, was long regarded as a purely genetically determined process that is independent of external factors. For some time now, however, it has become clear that developmental processes do not take place autonomously either. Most living beings have developed strategies to recognize changes in their environment and to adapt their individual growth and thus also the resulting body shape to the prevailing conditions.

But how this so-called phenotypic plasticity is controlled and how environmental factors including microbial influences are recognized and integrated into genetic development programs has only recently become the subject of research.

Within the framework of the Collaborative Research Center (CRC) 1182 “Origin and Function of Metaorganisms”, scientists at Kiel University and Heinrich Heine University Düsseldorf (HHU) have now investigated the principles of phenotypic plasticity in the freshwater polyp Hydra. They observed how the temperature and the presence of certain colonizing bacteria affect the individual development of cnidarians.

The researchers were able to identify two Hydra specific genes and demonstrate their involvement in a signaling pathway central to development, which together control the response of the polyp to cues from its environment. They recently published their results in the journal Proceedings of the National Academy of Sciences of the United States of America (PNAS).

The research team led by Professor Sebastian Fraune of the HHU used the phylogenetically old and simply organized freshwater polyp Hydra for its investigations. The cnidarian is particularly suitable for developmental biology studies, as even as an adult animal it continues to exhibit embryonic characteristics such as unlimited regenerative capacity – i.e. body parts such as the tentacles can regenerate at any time. “The polyps do not age, their genetic programs for controlling development are permanently running,” explains Fraune. “This means that the adult animal can also react to changing external factors at any time and adapt its body shape accordingly,” continues Fraune.

Under these conditions, the researchers of the CRC1182 investigated how the genetic activity of the animal changes depending on environmental conditions. They were able to identify two genes that they named ‘Eco1’ and ‘Eco2’ because of their response to environmental conditions. Both genes are taxonomically restricted which means that they are only found in Hydra. The research team exposed the animals to temperatures of 12 and 18 degrees Celsius and found that under the colder conditions both genes were strongly activated. In contrast, artificial removal of the natural bacterial colonization of the animals resulted in significantly less activity of both genes.

After the researchers had identified the genes involved in environmental perception, they investigated the effects of the two variables on the body shape of the animals: The sterilized animals tended to form more tentacles. A low ambient temperature, however, resulted in fewer tentacles being formed. These phenotypic adaptations are controlled, among other things, by a specific developmental biological process, the so-called Wnt signaling pathway. “In the animal kingdom, these signals emerged early in evolution and are also involved in humans in developmental processes such as stem cell regulation,” explains Fraune. “By experimentally switching off the environmental genes Eco1 and Eco2, we were able to prove that they can suppress Wnt signals in Hydra,” says first author Dr Jan Taubenheim, a researcher in Fraune’s group. External factors such as temperature or the absence of the natural microbiome therefore have a direct influence on the genetic regulation of the individual developmental program and thus on the formation of the body shape in cnidarians.

The effects of phenotypic plasticity can thus be traced back to Hydra-specific genes that regulate the adaptation to external influences in this organism. The study thus provides an example of the importance of such genetic information, also known as ‘orphan genes’ due to the lack of corresponding genes in other species. These rapidly evolving genes allow different organisms to adapt to new energy sources or habitats, for example. “It was already known that these genes intervene, for example, in the developmental program of a living being or are linked to the regulation of its immune system in order to implement an environmental reaction during development,” explains co-author Professor Thomas Bosch from Kiel University, head of the Collaborative Research Center 1182. “Our work now reveals an exemplary mechanisms that underlies this recognition of external factors. In this way, we were able to demonstrate which internal processes ultimately lead to the adaptation of a living being’s developmental program in response to its environment,” Bosch continues.

About the CRC 1182:
The Collaborative Research Centre “Origin and Function of Metaorganisms” is an interdisciplinary network involving around 80 researchers that investigates the interactions of specific microbial communities with multicellular host organisms. It is supported by the German Research Foundation (DFG) and deals with the question of how plants and animals including humans form functional units (metaorganisms) together with highly specific communities of microbes. The aim of the CRC 1182 is to understand why and how microbial communities enter into these long-term connections with their host organisms and what functional consequences these interactions have. The CRC 1182 brings together scientists from five faculties of Kiel University, the GEOMAR Helmholtz-Zentrum für Ozeanforschung Kiel, the Max-Planck-Institut für Evolutionsbiologie Plön, the Heinrich-Heine-Universität Düsseldorf, the Leibniz Institute for Science and Mathematics Education and the Muthesius University of Fine Arts and Design.

https://www.uni-kiel.de/de/pressemitteilungen/2020/200-taubenheim-pnas-fraune.jp…
Caption: HHU’s Prof. Sebastian Fraune investigates, among other things, how environmental factors including microbial influences are recognized and incorporated into the genetic development programs of living beings.
© HHU