Home / Life Sciences and Chemistry / How increasing the yield potential depends on the row-type in barley
07.12.2021 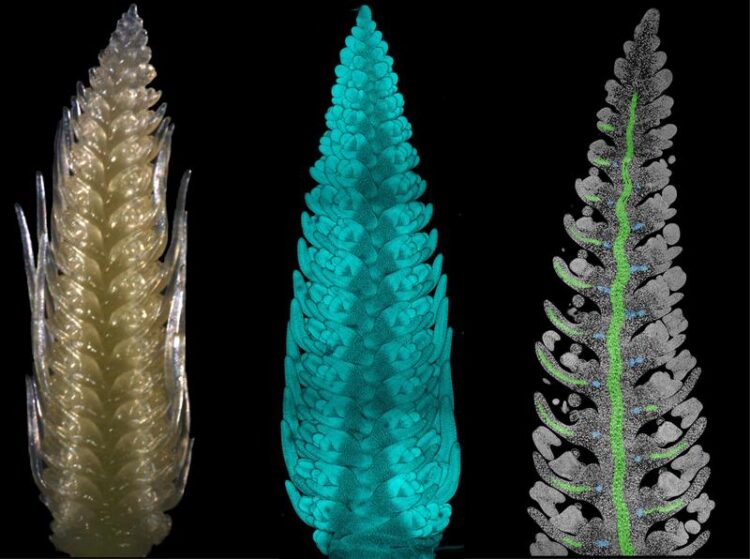 The light microscope image (left) shows a lateral view. In the middle is a confocal electron micrograph. On the right, the longitudinal section through a spike shows the vascular bundles (green) and so-called transfer cells (blue).
Credit: IPK Leibniz Institute

Agriculture is the major player in contributing to global food security. Increasing our crop productivity is currently a challenging task due to the limitations of climatic change and decreasing of agricultural land. Sustainable agriculture has been considered an excellent solution for the prevailing and future environmental conditions. To contribute to sustainable agriculture by improving crop productivity, we need precise information about these crops. Knowledge about the interactions of different yield components is of great importance for the best possible exploitation of yield potential. In barley, it is particularly important to increase the number of grains per spike. However, which factors play a role in this and what differences there are between different barley row-types has hardly been researched so far.

Researchers at the IPK Leibniz Institute have therefore investigated yield components such as maximum spikelet number, spikelet fertility and final spikelet number using a group of two- and six-rowed barley types as examples. The focus was on the question of what influence the individual factors from above have on the number of spikelets. The investigation was carried out both in the greenhouse and in the field.

The results showed that grain number in two-rowed barley is largely dependent on the maximum number of spikelets, whereas the central factor in six-rowed barley is the fertility of the spikelets. “So we have to keep an eye on different trait characteristics if we want to exploit the yield potential of the individual row types as optimally as possible. This was not clear to us in this form before,” emphasised Dr. Thirulogachandar Venkatasubbu, first author of both publications and scientist of IPK’s independent research group “Plant Architecture”.

Two- and six-rowed barleys do not only differ in their respective spike architectures and how they achieve their yield potential, as it was shown in the actual study, but also in their grain composition, Prof. Dr. Schnurbusch, head of the independent research group “Plant Architecture” and HEISENBERG professor at the IPK and the Martin Luther University Halle-Wittenberg, pointed out.

Although both barley forms can be crossed with each other, they are treated almost like separate genetic pools by plant breeders because of their very different directions of use. Two-rowed barley is usually cultivated as a summer form, predominantly in southern Germany. “Because of its low protein content, this barley is mostly used for brewing,” explained Prof. Dr. Thorsten Schnurbusch. The six-rowed barley is usually grown as a winter form. With a high protein content, they are very suitable as animal feed.

The two current publications are the first of the IPK’s indepenendet research group “Plant Architecture” to be produced in the course of funding by a “Consolidator Grant” from the European Research Council. “We will genetically analyse these now discovered differences in barley in further studies and resolve these observations in detail at the molecular level”, emphasized Prof. Dr. Thorsten Schnurbusch.