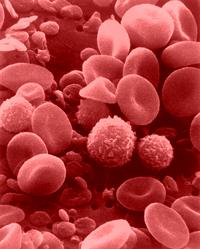 Haemophilia A is the most common congenital blood coagulation disorder. It is caused by various mutations in the so-called factor VIII (F8) gene. Depending on the type of mutation, the coagulation factor VIII is not formed in sufficient quantities or is missing entirely.

The missing coagulation factor is replaced by intravenous administration of so-called factor-VIII concentrates. However, around a quarter of treated patients who have severe haemophilia develop antibodies against factor VIII – the body treats the coagulations factor like a foreign body and inactivates it using its immune system.

One essential risk factor for the development of these inhibitors is a pronounced F8 mutation. However, not all patients who have such a mutation develop inhibitors, and, vice versa, inhibitors can also be found in a part of the patients with only minor alterations of the F8 gene. What complicates understanding the underlying mechanisms even more is that antibodies against factor VIII can be detected in some healthy individuals, too.

Inhibitors against factor-VIII concentrates partly make treatments of the patients concerned very difficult, and in extreme cases, they can lead to uncontrollable bleedings. For this reason, the team of scientists of Dr Zoe Waibler, head of Section Product Testing of Immunological Biomedicines of the Division Immunology at the Paul-Ehrlich-Institut has performed research on the underlying mechanisms in search of a possibility to prevent the formation of these inhibitors.

In previous research activities, she and her team had shown that certain “danger signals” in the blood such as particular surface molecules of bacteria (LPS, lipopolysaccharides) that warn the body of a pathogenic agent will increase the immunogenicity of factor-VIII products [1]. Immunogenicity describes the ability of molecules to elicit an immune reaction. Another example of this is cell stress resulting from surgical intervention, which transmits danger signals by releasing particular substances.

The increased immunogenicity of factor-VIII products causes so-called dendritic cells (DCs) to be activated to an increasing extent. These immune cells present antigens on their surface, i.e. molecular structures against which an immune response can be mediated. They form part of the innate immune system. In connection with other molecules, this leads to the formation of a subgroup of immune cells of the acquired immune system, the CD4-positive T cells, which are also called T helper cells.

Waibler’s team was now able to show that DCs, which are activated by the factor-VIII concentrate and the danger signal LPS synergistically, mediate a considerably stronger T helper cell activation than DCs, which were pre-treated solely with either factor VIII or LPS alone. In addition, they were able to clarify the dependency of T-cell activation on further immunological processing steps.

“Our results are another step on the road towards clarifying these complex immunological processes. This is a prerequisite for developing new approaches to haemophilia therapies which prevent the formation of these inhibitors against factor-VIII products”, said Waibler when explaining the significance of the results.