Home / Life Sciences and Chemistry / Discovery of genes involved in the biosynthesis of antidepressant
09.12.2019

Discovery of genes involved in the biosynthesis of antidepressant 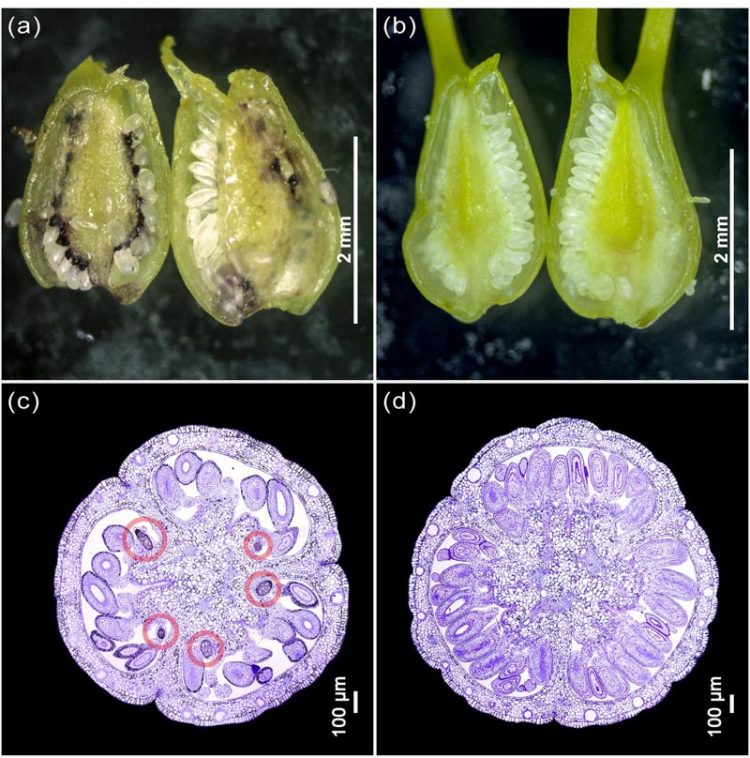 A and C: longitudinal and cross section of a pistil bearing dark glands in contrast to; B and D: corresponding sections of a glandless pistil Credit: P. Rizzo / IPK

The herb St John's Wort Hypericum perforatum has a long history as a medicinal plant. Greek physicians of the first century, such as Hippocrates and Pliny, recommended it as a diuretic and as a cure for snakebites, amongst other uses.

In the Middle Ages, it was used in magic potions to ward off evil spirits, whilst Paracelsus in the 16th century found it useful for the alleviation of pain and the treatment of melancholy.

In more recent times, St. John's Wort has been recognised for its applications in cancer therapy, due to the plant's bioactive compound hypericin. Despite its high demand in medical applications, the biosynthetic pathways of hypericin have yet to be fully unveiled.

Hypericum perforatum or St. John's Wort is an herbaceous plant with bright yellow flowers and translucent oil glands, giving its leaves a perforated appearance. Originally native to Europe and western Asia, the plant nowadays is found in temperate regions worldwide. Whilst considered a weed which is poisonous to livestock, St. John's Wort is better known for its medicinal properties.

The herb produces several secondary metabolites, of which hypericin counts as one of the most studied. This compound gained an important place in the scientific spotlight due to its potential use in cancer photodynamic therapy and the treatment of the Alzheimer disease.

By focussing on the dark gland development in the flowers, in particular the placental tissue, of St. John's Wort, a collaboration of scientists from German and Canadian research institutes recently discovered some of the key genes potentially involved in the development of dark glands, as well as the biosynthesis of hypericin.

Previous research had often focussed on the leaves of St. John's Wort as the model organ for the study of hypericin. However, by phenotyping 93 Hypericum- accessions, the researchers led by Dr. Paride Rizzo from the Leibniz Institute of Plant Genetics and Crop Plant Research (IPK) in Gatersleben, came across a polymorphism, which showcased glanded and glandless phenotypes in the placental tissue.

These results were achieved through a combination of transcriptomics and metabolomics that provides a view of unprecedented quality on gene expression and metabolites levels during dark gland development in H. perforatum.

First published online in April by the Plant Biotechnology Journal, the findings will now appear in the journal's December print edition. Understanding which genes are involved in the hypericin biosynthesis is a vital step when it comes to the development of new Hypericum extracts for medicinal application.

Having now demonstrated the potential of placental tissue as a new model organ for the study of dark glands and the associated biosynthetic pathways, further research will be able to build upon this knowledge.

In the near future we could expect that these candidate genes will be used to either hyperactivate or inhibit the formation of dark glands. This will lead to new applications of H. perforatum in the pharma industry.