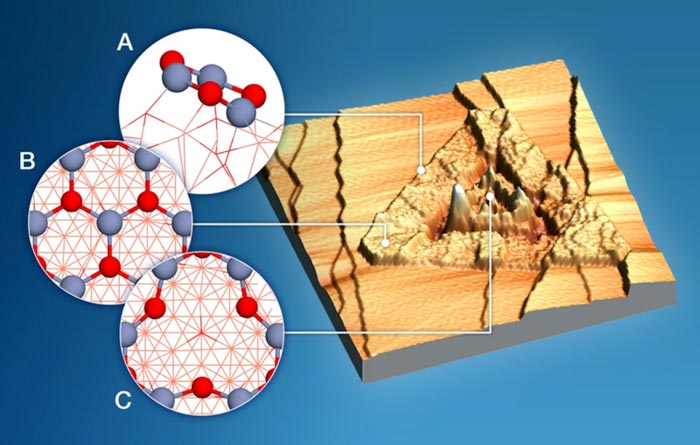 – with and without water.

Studies of a common catalyst suggest strategies for improving the conversion of a natural gas component to useful chemicals.

Chemists have been searching for efficient catalysts—substances that speed up chemical reactions—to convert methane into methanol. Methane, a major component of abundant natural gas, is sometimes flared off as waste at wells. Methanol is an easily transported liquid fuel and a building block for making other valuable chemicals. Adding water to the methane conversion reaction can help produce methanol, but it also complicates the process for industry. Now scientists have identified a common industrial catalyst that completes the conversion along different pathways depending on whether water is present or not. The findings suggest strategies for improving catalysts for the less-complicated, water-free reaction.

Scientists have used water to get the methane to methanol reaction going because it improves selectivity—the ability to drive the reactants to a specific desired product. Water also makes it easier to extract the methanol. But water adds complexity and cost to the process. At the temperatures and in the amounts required for this reaction, water exists as large quantities of steam. This steam must be controlled when the reaction is used in an industrial setting. Finding a catalyst to complete the reaction without water would simplify the synthesis of methanol from waste methane. An efficient process could potentially reduce the amount of methane, a potent greenhouse gas, by turning it into useful products.

In a recent study looking at a different catalyst for converting methane to methanol, scientists discovered that adding water improves selectivity. It keeps the reaction from running away to fully oxidize methanol to carbon monoxide (CO) and carbon dioxide (CO2). In this new study, a team from Brookhaven National Laboratory (BNL), Lawrence Berkley National Laboratory (LBNL), Stony Book University, and the Universidad Central de Venezuela tested a different catalyst to see if it could achieve this selectivity without water. Copper-zinc oxide, an affordable and readily available catalyst, had the best selectivity of any catalyst tested for methanol production without water, and even higher selectivity with water. The team used X-rays to study the catalyst under different reaction conditions at the Advanced Light Source (ALS), a Department of Energy (DOE) user facility at LBNL. X-ray-generated “chemical fingerprints” tracked methanol formation and intermediates. The scientists also used computing resources at BNL’s Center for Functional Nanomaterials (CFN) and the National Energy Research Scientific Computing Center (NERSC) at LBNL, both DOE user facilities, to identify the active sites on the catalyst and model the kinetics of different reaction pathways. Together, the data indicate that the reaction proceeds along two different pathways—one with and one without water—using two different sites of the catalyst. Additional modeling studies will now test other catalytic compositions, aiming to further improve water-free conversion of methane to methanol.