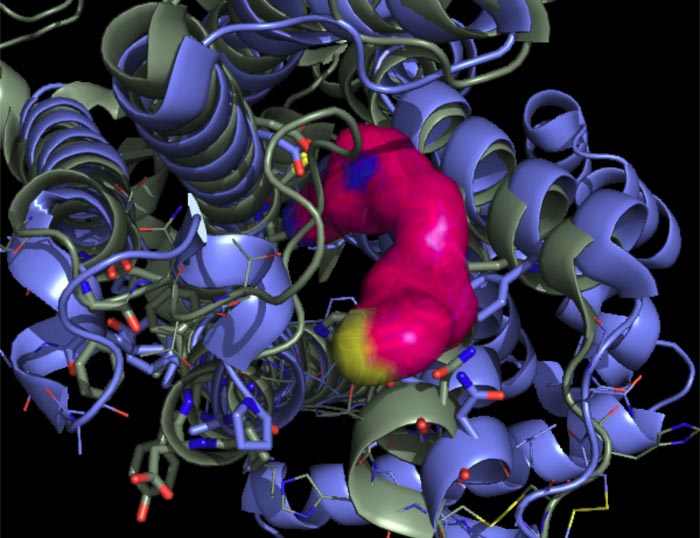 Erratic, involuntary movements often emerge as a side effect of the primary medication used to treat Parkinson’s disease. Texas Biomed researchers and collaborators have shown a compound can substantially reduce those movements in animal studies.

The small molecule, called PD13R, reduced dyskinesia by more than 85% in the marmoset animal model of Parkinson’s disease. And, the animals got much better sleep taking this compound compared to another drug often prescribed for dyskinesia. The results were published in the journal Experimental Neurology.

Dyskinesia is a common side effect in patients with Parkinson’s disease. It is not a symptom of the disease itself, but typically emerges about five years into taking levodopa, the leading medication used to restore balance, reduce shaking and manage other motor control issues patients experience.

“Levodopa is amazing, it works like magic, but it has side effects. If we can eliminate these side effects, it could change the life of patients with Parkinson’s,” says Marcel Daadi, PhD, an associate professor at Texas Biomed and lead paper author.

Designing drugs for Parkinson’s and its side effects is notoriously difficult. This is in part due to the progressive nature of the disease as neurons deteriorate, and because it involves the neurotransmitter dopamine. There are five types of dopamine receptors, all with different functions, yet very similar structures. Finding a compound that only interacts with the desired receptor is a major challenge.

To try to identify a compound that only binds to dopamine receptor #3 (D3), Daadi teamed up with Southwest Research Institute. SwRI’s drug discovery software RhodiumTM identified PD13R as a likely candidate and predicted how it would bind to D3. Daadi reached out to medicinal chemists at Temple University to synthesize the compound, who are currently working on this class of compounds for their antipsychotic properties.

Daadi and his team at Texas Biomed explored how well the compound targeted the D3 receptor compared to the other dopamine receptors in cell culture tests. They found it had a 1,486-times higher selectivity for D3 than for D2, which is the most similar in structure.

The team then administered PD13R to the marmoset animal model of Parkinson’s. Like human patients, the nonhuman primates developed dyskinesia after receiving levodopa. When treated with PD13R, dyskinesia dropped dramatically.

“We were very excited to see the robust antidyskinetic effect of the drug,” Daadi explains.

The animals wore activity monitors, and with PD13R, their activity was low at night, when they normally sleep. In contrast, when given a different drug currently on the market for dyskinesia, their nighttime activity was significantly high, suggesting that PD13R may be a good treatment option without this side effect.

Daadi and his team plan to continue with safety and efficacy studies required by the U.S. Food and Drug Administration (FDA) before human clinical trials can begin. “I am very hopeful we can move this into Phase 1 clinical trials within two years,” Daadi says.

This investigation used resources that were supported by the Southwest National Primate Research Center grant P51 OD011133 from the Office of Research Infrastructure Programs, National Institutes of Health. This work was supported by the Worth Family Fund, The Perry and Ruby Stevens Charitable Foundation, The Robert J. Jr. and Helen C. Kleberg Foundation, The Marmion Family Fund, The William and Ella Owens Medical Research Foundation, the National Institute on Aging R56 AG059284.

About the Southwest National Primate Research Center at Texas Biomed

Texas Biomed is one of the world’s leading independent biomedical research institutions dedicated to advancing health worldwide through innovative biomedical research focused on protecting the global community from the threats of infectious diseases. The Institute is home to the Southwest National Primate Research Center (SNPRC) and provides broad services in primate research. SNPRC contributes to a national network of National Primate Research Centers (NPRCs) with specialized technologies, capabilities and primate resources, many of which are unique to the SNPRC. The Center also serves investigators around the globe with research and technical procedures for collaborative projects. For more information on Texas Biomed, go to www.TxBiomed.org or for more information on SNPRC, visit www.SNPRC.org.