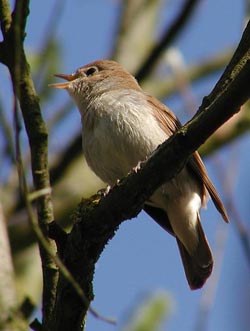 These findings were published by researchers at the University of Basel and the Netherlands Institute of Ecology in the online edition of «Journal of Avian Biology». With up to 100 trill elements a second, nightingales belong to the fastest singers.

Nightingales are famous for their large song repertoire: Each male can perform around 200 different song types. Facing this great variety, how can a female listener assess correctly if the male counterpart is a suitable mating partner? It is unlikely that the size of the repertoire is used as a performance indicator, since it would take about one hour for a male nightingale to sing through its whole song list. Thus, it is more likely that the quality of certain elements or song types are attended to for quick assessment.

Around 20 percent of nightingale songs contain rapid broadband trills that are characterized by particularly large frequency bandwidths. Since the performance of these sounds is very demanding, the rate at which they can be repeated is limited: «Trying to sing rapidly increasing sounds in fast repetition is very hard for us humans as well» says PD Dr. Valentin Amrhein, Zoologist at the University of Basel and head of the research station Petite Camargue Alsacienne in which the data was collected. Singing rapid broadband trills comes at a certain price for the male nightingale. Thus, it is suggested that males in good physical condition trill better and that therefore, trilling is a good indicator for male «quality».

Indeed, the scientists found out that older male nightingales perform faster trills with a broader frequency range than younger males. Based on the trills, females could therefore assess the age of the male singer and mate preferably with older ones. This behavior makes sense for female birds because older males are often more successful in reproduction.

Compared to 46 bird species investigated in other studies, the nightingale holds an exceptional position: The males use trills with a frequency bandwidth and repetition rates twice as wide or fast than that measured in other birds. This makes the nightingale one of the most sophisticated singers.