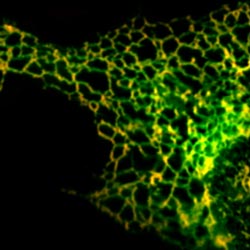 In eukaryotic cells, misfolded membrane proteins are retained in the Endoplasmic Reticulum (ER) as assessed by immunofluorescence microscopy. The micrograph shows a damaged membrane protein in green and an ER-resident protein in red leading to various overlaps in yellow.<br>Image: ZMBH<br>

Researchers from Heidelberg University’s Center for Molecular Biology (ZMBH) have achieved unexpected insights into the process of how damaged proteins are degraded within cells. Their work focused on the function of a special protease.

This enzyme can hydrolyse peptide bonds in the plane of cellular membranes, a site where such water-requiring reactions commonly do not occur. The scientists working with Dr. Marius Lemberg could now show that this unusual protease recognises and degrades aberrant proteins directly in the membrane. The findings were published online in “Molecular Cell”.

When the research team around Dr. Lemberg started its work on a member of these special proteases they predicted by computational approaches that this enzyme would be active. However, they still faced the challenge to experimentally determine the physiological substrates. “The existing knowledge about relatives from the so-called rhomboid protease family did not help us in our quest for the molecules processed by the enzyme we discovered”, says Dr. Lemberg. Unlike all rhomboid proteases that had been studied so far, the new rhomboid localises to the Endoplasmic Reticulum (ER), the site in the cell where new membrane proteins are produced.

The breakthrough came after the researchers observed that the ER rhomboid protease is increasingly needed during protein folding stress. Proteins are produced as long chains of amino acids that have to correctly fold into a three-dimensional structure to fulfil their function. Especially when accumulating, misfolded proteins can severely damage cells and are known to cause impairments such as Alzheimer's and Parkinson's disease.

“We now have revealed that the ER rhomboid protease cleaves aberrant membrane proteins within their membrane anchor”, says Dr. Lemberg. Furthermore, the scientists demonstrated that this protease cooperates directly with components of the so-called ER-associated degradation (ERAD) pathway to dispose of the faulty protein. According to Dr. Lemberg, these new insights now provide the basis for a molecular understanding of how membrane proteins that make up a large fraction of cellular proteins are extracted from these membranes for degradation without getting into each other’s way.

The junior research group of Dr. Lemberg is part of the DKFZ-ZMBH Alliance – the strategic cooperation between the German Cancer Research Center (DKFZ) and the Heidelberg University's Center for Molecular Biology (ZMBH) – as well as of the interdisciplinary Network Aging Research (NAR) at Ruperto Carola. The group receives funding from the Baden-Württemberg Foundation.

For further information, go to: http://www.zmbh.uni-heidelberg.de/lemberg/default.shtml.