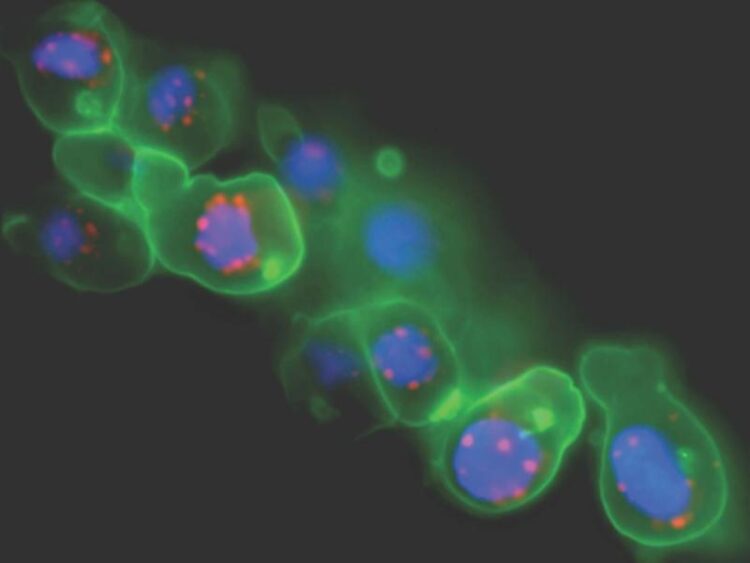 A team led by cell biologist Prof. Erez Raz from the University of Münster has investigated the role of the cell-cell adhesion protein E-cadherin in the targeted migration of germ cells in zebrafish embryos and found out that the protein mediates the interaction of the cells with their environment. It supports the localisation of certain proteins in a specific region of the cells by indirectly coupling these proteins to the surrounding cells. The study has been published in the journal Nature Communications.

Temperatures are dropping, the next wave of colds is approaching – and that means it is time for increased activity on the part of immune cells. In autumn and winter, these constantly active cells hit top form: as soon as the body is weakened by an approaching infection, they head for the source of that infection. What is almost completely unexplained, however, are the mechanisms behind this and what causes the cells to move efficiently to target a certain part of the body.

A group of German and French researchers from the University of Münster and the Institut Pasteur in Paris have been investigating this, and in the process they have discovered a new function of an already known protein – a new, important player with an involvement when cells move and are directed: the so-called cell-to-cell adhesion protein E-cadherin. The role which this protein plays for cells has now been published by the team in the journal Nature Communications.

Cells migrate through the body from the very first moment in the life of an organism up to its death. This remarkable process, referred to by specialists as ‘cell migration’, plays a decisive role in a wide range of processes in life – from embryonic development to reproduction and immune defences. Any misdirected cell migration has consequences.

It can lead for example to pathological conditions such as congenital malformations, inflammations and cancer cell metastasis. Cells – for example immune cells, nerve cells or germ cells – migrate to a precisely determined region in the body in order to fulfil their function there. Without this ability which the different cell types have, the body would not be able to function.

In order to get to the bottom of the mechanisms surrounding cell migration, Münster University researchers in the working groups led by Prof. Erez Raz and Prof. Timo Betz from the Institute of Cell Biology teamed up with a group of researchers led by Jean-Christophe Olivo-Marin from Paris. A leading role was played by the study’s lead author Dr. Cecilia Grimaldi, who together with secondary author Dr. Isabel Schumacher investigated the migration of primordial germ cells (PGCs), a special type of cell in zebrafish embryos. PGCs are the precursors of the egg cell or sperm cell in a mature organism and play an important role in reproduction: the ability of these cells to reach the spot where the ovary or testicle is developing during the development of the embryo is an essential prerequisite for fertility.

The international research alliance has come a lot closer to understanding the processes of cell migration. The team found out, for example, that the PGCs migrate through the organism individually, but nevertheless depend on help from the cells all around them to progress towards their target. The protein which facilitates this interaction between the cells is the cell-to-cell adhesion protein E-cadherin, which supports the localisation of certain proteins in a specific region of the cell by joining up these proteins indirectly to the surrounding cells.

The proteins thus influenced play an important role in ensuring that the cell continues to migrate in the right direction. If E-cadherin is removed, the cells depart from their correct migratory course and do not reach their destination. But it is not only the elimination of the protein which makes itself felt in cell migration – any change in the E-cadherin level exclusively in the surroundings does, too: it was found that such a change in the surrounding cells influenced the path taken by the PGCs.

The findings made by Dr. Grimaldi and her colleagues represent an important step towards a greater understanding of important medical processes. The decision to collaborate with Münster on the study was clear for her: having completed the Graduate Programme run jointly by the Max Planck Institute Münster and the University of Münster – and the study proceeded from the Graduate Programme – Grimaldi has excellent contacts with the research location.