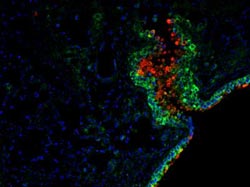 These microbial partners provide beneficial aid in multiple ways – from helping digest food to the development of a healthy immune system.

In a new study published online in the journal Immunity, David Artis, PhD, associate professor of Microbiology, and Michael Abt, PhD, a postdoctoral researcher in the Artis lab, Perelman School of Medicine, University of Pennsylvania, show that commensal bacteria are also essential to fight off viral infections.

“From our studies in mice, we found that signals derived from these beneficial microbes are essential for optimal immune responses to experimental viral infections,” says Artis. “In one way we could consider these microbes as our 'brothers in arms' in the fight against infectious diseases.” Artis is also an associate professor of Pathobiology in the Penn School of Veterinary Medicine.

Signals from commensal bacteria influence immune-cell development and susceptibility to infectious or inflammatory diseases. Commensal microbial communities colonize barrier surfaces of the skin, vaginal, upper respiratory, and gastrointestinal tracts of mammals and consist of bacteria, fungi, protozoa, and viruses. The largest and most diverse microbial communities live in the intestine.

Previous studies in patients have associated alterations in bacterial communities with susceptibility to diabetes, obesity, cancer, inflammatory bowel disease, allergy, and other disorders. Despite knowing all of this, exactly how commensal bacteria regulate immunity after being exposed to pathogens is not well understood.

To get a better picture of how these live-in bacteria are beneficial, the Artis lab used several lines of investigation. First, they demonstrated that mice — treated with antibiotics to reduce numbers of commensal bacteria — exhibit an impaired antiviral immune response and a substantially delayed clearance of a systemic virus or influenza virus that infects the airways. What's more, the treated mice had severely damaged airways and increased rate of death after the experimental influenza virus infection, demonstrating that alterations in commensal bacterial communities can have a negative impact on immunity against viruses.

Next, they profiled the genes that were expressed in immune cells called macrophages isolated from the antibiotic-treated mice. These data revealed a decreased expression of genes associated with antiviral immunity. In addition, macrophages from antibiotic-treated mice showed defective responses to interferons, proteins made and released in response to viruses, bacteria, parasites, or tumor cells. Under normal circumstances, interferons facilitate communication between cells to trigger the immune cells that attack pathogens or tumors. The antibiotic-treated mice also had an impaired capacity to limit viral replication. However, when mice were treated with a compound that restored interferon responsiveness, protective antiviral immunity was re-established.

“It is remarkable that signals derived from one type of microbe, in this case bacteria, can have such a profound effect on immune responses to viruses that are a very different type of microbe,” says first author Abt. “Just like we would set a thermostat to regulate when a heater should come on, our studies indicate that signals derived from commensal bacteria are required to set the activation threshold of the immune system.”

Taken together, these lines of evidence indicate that signals from commensal bacteria beneficially stimulate immune cells in a way that is optimal for antiviral immunity. “Although more work needs to be done, these findings could illuminate new ways to promote better immunity to potentially life-threatening viral infections,” adds Artis.

In addition to Artis and Abt, co-authors are Lisa C. Osborne, Laurel A. Monticelli, Travis A. Doering, Theresa Alenghat, Gregory F. Sonnenberg, Michael A. Paley, Marcelo Antenus, Katie L. Williams, and E. John Wherry, all from Penn, and Jan Erikson from the Wistar Institute.

The Perelman School of Medicine is currently ranked #2 in U.S. News & World Report's survey of research-oriented medical schools. The School is consistently among the nation's top recipients of funding from the National Institutes of Health, with $479.3 million awarded in the 2011 fiscal year.

Penn Medicine is committed to improving lives and health through a variety of community-based programs and activities. In fiscal year 2011, Penn Medicine provided $854 million to benefit our community.