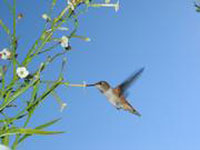 Animals “personally” bring their gametes together – seeking out sexual partners, mating, fertilizing, and reproducing. Plants, however, are sessile organisms and require the help of a third party, the pollinator, which can be a bird, mouse or insect that transport pollen to receptive stigmas frequently over large distances.

The colors and shapes of flowers as well as their volatile signals and nectar attract and reward the pollinators for their efforts. But not all flower visitors are pollinators, as many come only to steal nectar without transporting pollen or eat flower parts. Scientists at the Max Planck Institute for Chemical Ecology, Jena, have discovered that the chemistry of floral scents and nectar enforces good pollinator behavior and allows plants to optimize their ability to exchange gametes with each other.

In a paper published in the latest issue of SCIENCE (August 29, 2008), the scientists report the results from field experiments with genetically modified wild tobacco plants that show that particular components of the floral fragrance attracted pollinators, while bitter-tasting and poisonous components of floral nectar enforced modest drinking behavior. Apart from sugars, the floral nectar of tobacco also contains nicotine, which is bitter and used to deter nectar thieves or herbivores. But given the right timing and dose, nicotine in the nectar and the attractant, benzyl acetone, released at night as part of the floral scent, ensure that the visits of pollinators such as hummingbirds and hawk moths optimize the tobacco plant's ability to exchange gametes and produce outcrossed seeds.

Prior to these field tests, the researchers showed that the amount of nicotine in the floral nectar of wild tobacco influenced pollination by the tobacco hornworm Manduca sexta and two hummingbird species [1]. To understand the floral biochemistry and plants' ecological interactions with their mobile visitors, the researchers generated four different lines of genetically modified wild tobacco (Nicotiana attenuata). Apart from control plants that had received only a blind copy of the transgenic DNA fragment, transgenic lines were created (by means of RNA interference) that were unable to produce either nicotine or benzyl acetone; the latter has a sweet odor we know from cocoa beans and is similar to the smell of jasmine and strawberry. A fourth line of transgenic plants could produce neither nicotine nor benzyl acetone.

After a series of control experiments in the field showed that the genetic modifications per se did not influence growth, flower formation, nectar production, or the frequency of outcrossing, the scientists ran a series of three tests: First, measurements of floral nectar showed that its volume was only half the size in transgenic plants which were impaired in nicotine production, compared to control plants and the lines that could not produce benzyl acetone as an attractant. Conclusion: Floral visitors are principally attracted by the scent, and they drink more nectar if it doesn't taste bitter. Using video cameras, the researchers confirmed this result: Both attractant-deficient lines were rarely visited by hummingbirds (e.g. Archilochus alexandri) and white-lined sphinx moths (Hyles lineata). When visitors took nectar from flowers which contained a natural amount of deterring nicotine, they stayed for a short time only, while they enjoyed the nicotine-free nectar of corresponding transgenic lines. Consequently, these flowers were visited for longer periods, especially by hummingbirds.

However, such observations do not prove that different visiting behaviors affect outcrossing and reproduction among plants. Therefore, two further analyses were performed, one focused on female fitness (production rate of seeds in the ovary), the other on male fitness (successful pollination of neighboring plants).

To determine female fitness, the flowers of the four transgenic plant lines were emasculated by removing the anthers. This enabled the researchers to measure only animal-mediated fertilization success rates, because self-pollination was prevented – a method utilized by plant breeders. It could be shown that only the control plants were normally cross-pollinated by pollen of the surrounding wild-grown tobacco plants, whereas the transgenic nicotine- and benzyl acetone-deficient lines could only produce less than half of the seeds.

The scientists measured the male fitness of the four transgenic lines by emasculating flowers of plants and subsequently determining the origin of pollen which had fertilized their seeds with DNA probes. This paternity test allowed scientists to identify which of the transgenic plant lines were most successful at passing their pollen along to neighboring plants. Here it could also be shown that the control plants producing natural amounts of nicotine and benzyl acetone were the most potent ones; the big losers (almost five times less of cross-fertilized seeds) were the plants that produced neither nicotine nor benzyl acetone.

Interestingly, during the growing season, the male fertilization success switched from the attractant (benzyl acetone)-deficient to the nicotine-deficient plants. In other words: The influence of nicotine in the nectar on successful pollinator-mediated fertilization of tobacco plants decreased continuously, whereas the attractant became more and more important. These measurements were confirmed by video recordings which showed that early in the year, when hummingbirds visit tobacco, nicotine in the nectar causes them to drink less of the bitter nectar, and in turn visit other flowers, thus increasing pollen transfer. Later in the year, moths visit frequently, attracted by the odor of benzyl acetone. The bitter taste of the nectar doesn't seem to bother them.

The leader of the studies, Ian Baldwin, notes that just as the manufacturers of soft drinks protect their formulas and strive for constancy in order not to lose market share, altering their recipes only in response to the dictates of global sales, so plants evolve and incorporate ingredients into their nectar recipes in response to the dictates of their Darwinian fitness. “Nectar, which was thought to be nature's soft drink, may not be so soft after all,” Baldwin says. Unlike animals, plants are sessile, and through chemistry, flowers can optimize visitors' behavior.

The scientists also observed that nicotine in the nectar deters flower-eating insects which have a straightforward negative impact on reproduction. Odorant attractants lure not only pollinators but also herbivores. Tobacco plants seem to solve this dilemma by using nicotine as a deterrent.

The experiments with flowering transgenic tobacco plants were conducted at MPI's field station operated at Brigham Young University's Lytle Ranch Preserve in Utah, USA, and were monitored by the responsible authorities (USDA-APHIS).

Keyword: Chemical Ecology
Chemical ecology is a young discipline among the life sciences. Interactions, harmful as well as beneficial, are mediated by chemical signals between organisms. At the Max Planck Institute for Chemical Ecology, researchers examine the structure and function of molecules that regulate the interplay among plants, insects and microbes, and seek insight into the growth, development, behavior, and co-evolution of plant and animal species. The results of this basic biological research are used for the analysis of natural products, modern environmental analyses, and the development of state-of-the-art agricultural techniques. The institute is equipped with greenhouses, climate chambers, insect-rearing facilities, odor detection systems, wind tunnels, neurophysiological instruments, and field stations.
Original Publication:
Danny Kessler, Klaus Gase, Ian T. Baldwin: Field experiments with transformed plants reveal the sense of floral scents.