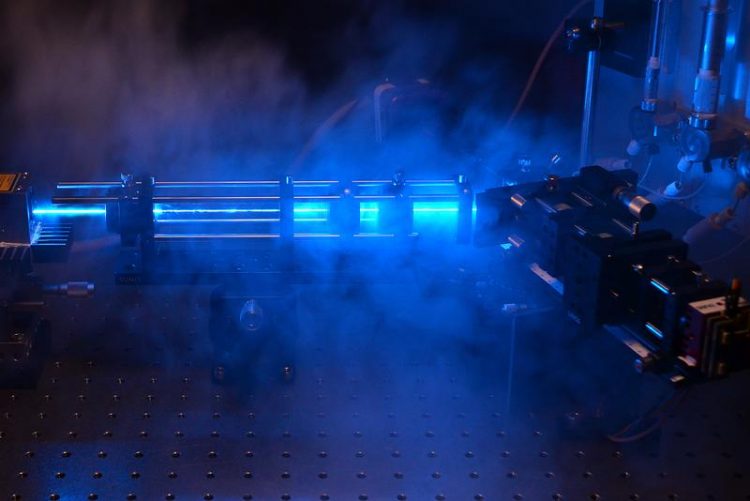 The measuring channel that forms the key component of the cytometer is visible on the right-hand side of the image. © Fraunhofer ICT-IMM

Both chemotherapy and radiotherapy place a high burden on the patient’s body. Their discomfort could be reduced if it was possible to reliably ascertain the results of this treatment, but until now the only way to do this was by computerized tomography (CT) scans.

A quicker and simpler analysis technique may soon be available, within a couple of years. All the PoCyton flow cytometer needs is a sample of the patient’s blood, and within a short time the attending physician will know how many tumor cells are circulating in the blood.

Cancerous growths release cells into the bloodstream, and their number provides an indication of how effective the therapy has been: If the number of cancerous cells decreases in the course of treatment, it shows that it has been effective.

Existing flow cytometers are capable of measuring the quantity of tumor cells circulating in the bloodstream but they often cost up to 300,000 euros and take up a huge amount of space – equivalent to two washing machines. Moreover, each test cycle lasts several hours. All in all, such techniques are too expensive and time-consuming for everyday clinical practice.

A further downside of these cytometers is that they can only be operated by trained specialists and require daily recalibration. An alternative is the PoCyton device developed by researchers at the micro-engineering branch of the Fraunhofer Institute for Chemical Technology in Mainz (IMM). As Dr. Michael Baßler, research scientist at ICT-IMM, explains:

“Our flow cytometer enables such tests to be carried out around twenty times faster. Their cost is also lower by several magnitudes, which takes us into a new dimension that makes these devices much more affordable for clinical applications.” Another advantage of the new flow cytometer is the use of miniaturized components that have reduced its size to that of a shoebox. Measurements are carried out automatically, and no calibration is necessary.

Flow cytometry works on the following principle: A fluorescent dye is injected into the blood, and the dye molecules bind to the tumor cells, leaving all other cells unmarked. Whereas until now the physician had to add the dye to the blood sample manually, this now takes place automatically in the PoCyton process.

The blood is funneled through a narrow focal area, causing all suspended cells to pass one by one in front of a laser spot detector. The light causes the cells to which the dye has attached itself – the tumor cells – to fluoresce, enabling the device to detect and count them.

This narrow passage is the key to the PoCyton process. “We designed it in such a way that the throughput is 20 times greater than in conventional cytometry,” says Baßler. At the same time, its geometry was chosen to ensure that no cells pass in front of one another. In this way the scientists can be sure that the system registers every single object flowing past the detector – and that no cell is hidden behind another.

Such errors could have dramatic consequences, because a mere ten-milliliter sample of blood contains around one billion suspended objects. Of these, only five are circulating tumor cells, even in a severely sick patient. The researchers have mastered the individual steps such as adequate sensitivity, automatic sample preparation, and analysis. They are now combining these separate process steps to create a fully function demonstrator which they expect to complete by the summer of 2015.

Potential applications of PoCyton go beyond the counting of tumor cells. For example, in collaboration with Swiss company rqmicro the researchers intend to use the device to detect legionella bacteria in drinking water. These members of the staphylococcus family can cause the sometimes deadly lung infection known as Legionnaires’ disease.

Until now, the only way of testing domestic drinking water involved sending a water sample to a laboratory and waiting about ten days for the results. For this is the time needed to multiply the water-borne bacteria in a Petri dish so that their concentration can be measured. “Our flow cytometer can perform the same analysis within an hour,” says Baßler.

A plumber can use the portable device to test the water in situ. All he has to do is place a water sample in the device and start the process. According to rqmicro, a commercial version of the product should be available within about two years.