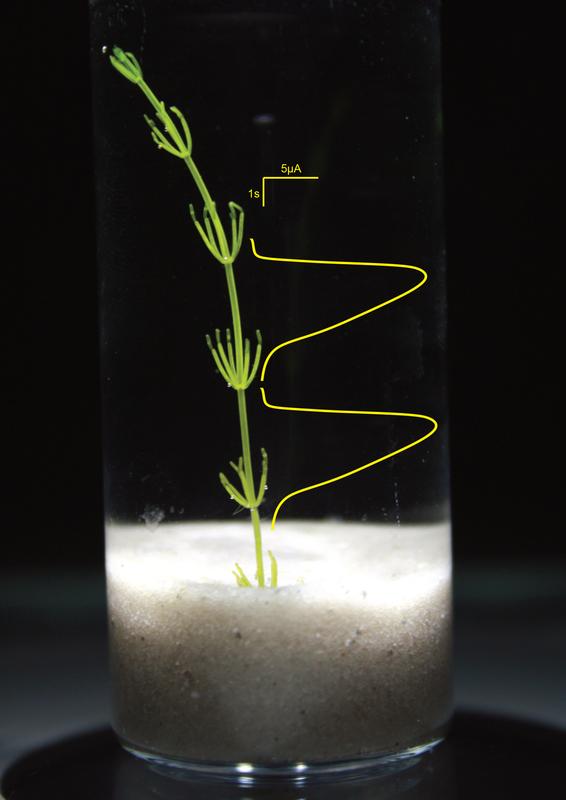 500 million years ago, the first plants living in water took to land. The genetic adaptations associated with this transition can already be recognized in the genome of Chara braunii, a species of freshwater algae. An international research team headed by Marburg biologist Stefan Rensing reports on this in the journal Cell.

Rainer Hedrich and Dirk Becker from Julius-Maximilians-Universität Würzburg (JMU) in Bavaria, Germany, are also members of this team. “The genes of the Chara braunii alga comprises numerous evolutionary innovations that have been ascribed only to land plants so far,” Professor Hedrich explains; he is the head of JMU’s Chair of Molecular Plant-Physiology and Biophysics.

The stress hormone abscisic acid (ABA) is one of these innovations. It makes land plants switch to water saving mode during dry conditions. In water plants, this function is redundant. Still these early synthesis steps for ABA are already included in the genes of Chara braunii algae according to Hedrich. The matching hormone receptors in contrast are nowhere to be found.

Chara braunii is a higher developed algae species which resembles a land plant. Among others, it features root-like structures that anchor the plant to the littoral substrate. It is not known whether the algae roots do take up any nutrients like their land-bases counterparts. The alga is permanently surrounded by water containing nutrient salts and has the ability to absorb the vital substances with virtually every cell of its body.

“Most genes that play a role in absorbing and distributing nutrients are also found in the genome of Chara braunii,” says Professor Dirk Becker. In contrast, high affinity transporters for potassium as exist in roots of land plants have not yet been detected in Chara: “This could mean that potassium is more easily available in water than in soil.”

In addition to a primitive root, the algae have a plant-like architecture with internodes and nodes bearing leaf-like structures. The internodes can be up to 20 centimetres apart and are equipped with a special feature: These giant cells emit electrical signals and forward along the body of the algae.

“For this reason, Chara braunii has been used as a model to research the electrical excitability of plant cells since the 1950s,” Hedrich explains. “Because its cells fire action potentials following tactile or light stimulation the alga is also called 'green axon'.” An axon is the long threadlike part of human and animal nerve cells along which electrical impulses are conducted.

Hedrich's team now wants to harness the decoded Chara braunii genome to study which ion channels in the algae are responsible for the action potentials. In land plants, glutamate receptor channels play a decisive role in the transmission of electrical signals over longer distances. However, these receptors do not exist in the genome of Chara. So scientists still have to resolve a number of questions regarding the evolutionary origins of electrical excitability in plants.