ADP-ribosylation on the right track 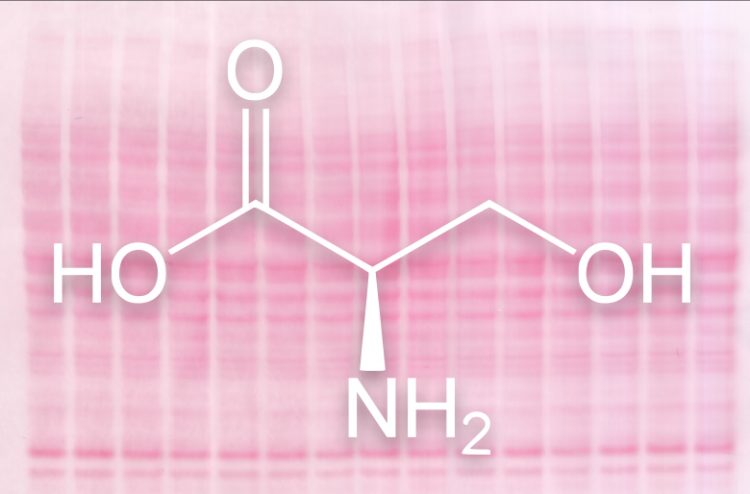 Chemical structure of the amino acid serine, which is part of almost all proteins and the main target for ADP ribosylation. In the background a membrane with stained proteins. ©Max Planck Institute for Biology of Ageing

Scientific achievements enlarge our knowledge about how things work and eventually enable us to understand details and even to predict the unknown.

But sometimes the assumptions we make based on what we have already seen limit our perception and bias our approach to the new. This is exactly what happened with ADP ribosylation (ADPr), a particular protein modification that appears in every cell and is essential for almost all biological processes.

When a protein gets ADP ribosylated, it gets labeled with additional information. For example, an ADPr signal can be placed on a protein for the recruitment of vital factors to repair damaged DNA, the genetic information in cells. Like an alarm in case of an emergency, it marks the place where help is needed.

For half a century it was believed that ADPr modifies particular sites on proteins: the amino acids glutamate, aspartate, arginine and lysine. But the functional characterization of these identified sites showed very slow progress.

“We know the reason for this now: most of the sites were mis-localised” says Orsolya Leidecker, a scientist in the group of Dr. Ivan Matić from the Max Planck Institute for Biology of Ageing. Now the scientists have finally identified the amino acid serine as the major site of ADPr by using a new technique. Due to its chemical structure, serine was never really considered as a target, which makes this finding all the more exciting.

“It’s a little like the discovery of the structure of the DNA”, explains group leader Dr. Ivan Matić. “People had known for decades that there must be genetic information stored somewhere but didn’t know where or how. The field of ADPr modification was similarly slow to develop for lack of precise knowledge about which amino acid ADPr attaches to. Now we finally know exactly where this information sits.”

Additionally, the Matić group and their collaborators in Oxford have developed a simple method for validating serine ADP-ribosylated sites in cells, which enables any scientist to examine ADPr on their protein of interest. “Anybody in any lab can perform the experiment and investigate if the modification of their protein is on serine” says Leidecker, who contributed to the main part of the work.

Actually, the identification of the correct position of ADPr is only the beginning. Researchers can now investigate the impact of ADPr on proteins, understand their functionality and develop strategies to use this modification as a target for drug development. Targeting processes regulated by ADPr is already a very promising strategy in treatment of cancer and acute cardiovascular conditions.

The research was performed in collaboration with CECAD.