Across the cell membrane 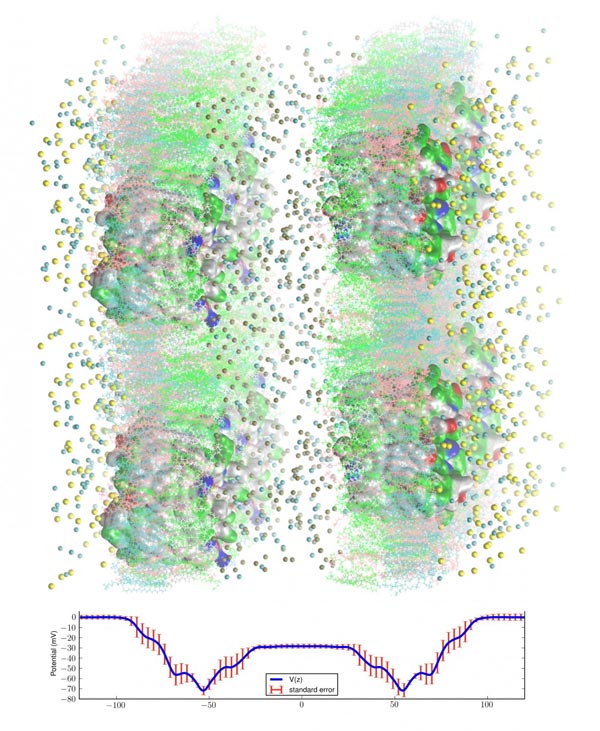 Some of the most essential processes on the planet involves water and energy entering and leaving cells.

The cellular doormen responsible for this access are known as aquaporins and glucose transporters, two families of proteins that facilitate the rapid and yet selective flux of water, glucose and other small substances across biological membranes.

Aquaporins are present in all kingdoms of life, demonstrating their central role in maintaining the health of all organisms. The first aquaporin was discovered in 1992, earning its discoverer, Peter Agre, the Nobel Prize in Chemistry in 2003. Since that time, more than 450 individual aquaporins have been identified.

Computer-based experiments — in particular molecular dynamics (MD) simulations — have proven to be important in determining how materials permeate through channel proteins at the molecular level.

According to Liao Chen, textbook descriptions of glucose transporters have underestimated the complexity of how these proteins operate. Experiments and x-ray crystallography can only capture so much details, and computer simulations have been limited in their ability to model large-scale systems that include the membrane complexities involved in the gating, and other factors.

Chen has studied this problem using supercomputers at the Texas Advanced Computing Center (TACC) for more than a decade, with increasing accuracy and complexity.

“As a theoretical physicist, I firmly believe in what Richard Feynman said: that everything that living things do can be understood in terms of the jigglings and wigglings of atoms,” Chen said. “We've tried to build a bridge from the jiggling and wiggling of millions of atoms to very simple deterministic behavior of biological systems.”

Since 2019, he has applied the modeling power of Frontera — one of the most powerful supercomputers in the world — to investigate how the aquaporins and glucose transporters in human red blood cells move water and glucose in and out of the cell.

“We're building models of membrane proteins from atoms including their immediate environment in the membrane,” Chen said. “The membrane is composed of lipids and the inner and outer leaflets are asymmetrical. Qualitatively, we understand how water and glucose move, but no one has modeled the membrane correctly for quantitative accuracy that is a norm in other branches of physics. We are moving in that direction.”

Chen's research has found significant differences between the results produced by simple models and the more realistic ones he uses.

“With Frontera, we have been able to get closer to reality and achieve quantitative agreement between experiments and computer simulations,” he said.

Beyond the basic biological function of aquaporins and glucose transporters, these proteins are implicated in diseases such as de Vivo's syndrome, a neurological disorder, and multiple forms of cancer. In April 2020, Chen published a paper in Frontiers in Physics applying the research to a disease-causing parasite that is a useful analogue for the virus that causes malaria in humans. Researchers are also investigating the manipulation of these proteins as a treatment for certain types of cancers — limiting the availability of needed nutrients to stop the growth of tumors.

Water movement in and out of cells involves the simplest of membrane transporters. However, the glucose transporters that conduct glucose — which provides the energy needed by all cells — across cell membranes are more complicated.

“The mechanism of how glucose is transported is controversial, but I believe we are now very close to the answer,” Chen said.

It was long assumed glucose transporters obey the alternating access theory like many other proteins in the major facilitator superfamily. Proteins in this superfamily have two groups of transmembrane helices that are theorized to swing relative to each other. In that way, the protein can be open on the extracellular side to allow a sugar into the protein. Then the two groups swing so that protein becomes open to the intracellular side allowing the sugar to leave the protein and enter the cytoplasm. The protein keeps alternating between the conformations open to the outside and open to the inside to ferry the energy needed in cellular metabolism.

“Our studies indicate that once we put this simple transporter in cells, if you use an asymmetrical membrane, the transporter does not have to go through an alternating access mechanism,” Chen said. “It actually has a gate on the extracellular side that fluctuates between being open and closed based on body temperature. So that's an example of diversity in the mechanism of transporter proteins.”

Chen has published two papers on this specific topic so far. Writing in ACS Chem. Neuroscience, his team provided a quantitative study of glucose transporter 3, which is common in the central nervous system and thus called the neuronal glucose transporter. In a more recent paper in Biochemical and Biophysical Research Communications, they suggested the new possibility for how glucose transporters operate.

Chen's team also does laboratory experiments to see the overall behavior of cell, and to get a baseline truth to compare his models to. But supercomputers are required to get to the specific mechanistic details.

In April 2020, Chen was awarded 200,000 node hours on Frontera to model the protein channels in greater detail.

“On Frontera, each core is faster and the system is massive, so we can model larger systems a lot quicker,” he said. “Larger systems are a must. When you deal with small systems, you're not close to reality.”