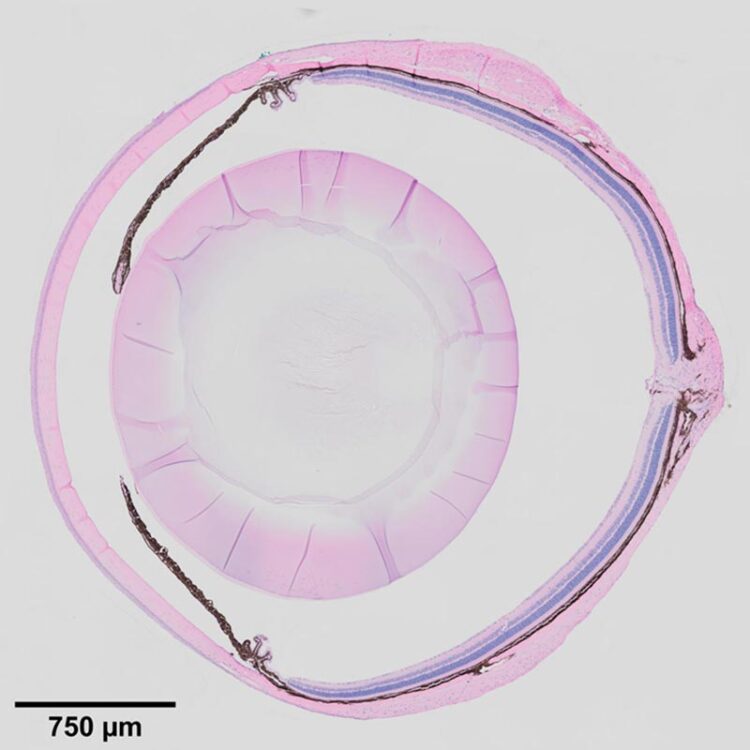 What if the degenerative eye conditions that lead to glaucoma, corneal dystrophy, and cataracts could be detected and treated before vision is impaired? Recent findings from the lab of Investigator Ting Xie, PhD, at the Stowers Institute for Medical Research point to the ciliary body as a key to unlocking this possibility.

Previous work from the lab showed that when mouse stem cells were differentiated into light-sensing photoreceptor cells in vitro, and then transplanted back into mice with a degenerative condition of the retina, they could partially restore vision. However, the transplanted photoreceptors only lasted three to four months.

“You cannot cure the condition in a diseased eye if you don’t know what causes the disease,” says Xie. “This has been a major hurdle for stem cell therapy in treating degenerative diseases.”

To this end, Xie’s group began to study the eye tissue microenvironment, specifically a specialized tissue in the eye called the ciliary body. Located at the posterior edge of the iris, it is known to maintain ocular pressure by secreting aqueous humor, the clear fluid between the lens and the cornea. It has a similar function in mice and in humans, and defects in the ciliary body manifest in similar ways in the mouse and human eye.

“People think the ciliary body is boring,” says Xie. This might be because the ciliary body was once thought to have a reserve of retinal stem cells, Xie explains, which turned out not to be true. However, its role in eye biology turns out to be quite broad, and “without a functioning ciliary body, the eye degenerates,” Xie adds.

When the Notch signaling pathway–an important cell signaling system found across the animal kingdom–is defective in the ciliary bodies of newly born mice, they fail to develop folds, and secretions decrease, leading to shrunken vitreous bodies. In adult mice, defects in Notch signaling cause low eye pressure, a shrunken vitreous, and eye degeneration. Inactivation of the downstream transcription factor RBPJ in the ciliary body also leads to the same effects. Before now, the underlying molecular mechanism for this outcome was unclear.

In a paper published in Cell Reports on January 12, 2021, first author Ji Pang, a visiting PhD student from Shanghai Jiao Tong University, China, and others describe a signaling pathway wherein Notch and Nectin proteins in the ciliary body function in the development and maintenance of eye tissue and structure.

In this report, the researchers describe the roles of adhesion protein Nectin1 and gap junction protein Connexin43 in the ciliary body of mice. They found that Notch2/3-Rbpj signaling in the outer ciliary epithelium controls the expression of Nectin1, which works with Nectin3 in the inner ciliary epithelium to keep the two tissue layers together, which promotes proper folding of the ciliary body. They found that Notch signaling also maintains the expression of Connexin43 in the outer ciliary epithelium, while Nectin1 localizes and stabilizes Connexin43 on the lateral surface, which maintains the vitreous body and intraocular pressure.

Lastly, the researchers found that in addition to maintaining ocular pressure and directing ciliary body morphogenesis, Notch2/3-Rbpj signaling in the inner ciliary epithelium also regulates the secretion of various proteins such as Opticin and collagens into the vitreous body, providing nutritive support for the cornea, the lens, and the retina.

“We propose the ciliary body could be a niche for the eye tissues,” explains Xie, in the sense that it can behave like a stem cell niche, by providing signals that affect cellular morphogenesis and function. “The next important question is what other protein factors secreted by the ciliary body are important for maintaining the cornea, the lens, and the retina, respectively. Some of these factors could be involved directly in eye diseases.”

One of the leading causes of glaucoma is high intraocular pressure, which can cause blindness due to damage of the optic nerve. Intraocular pressure is largely maintained by the ciliary body, a specialized tissue in the eye of animals that secretes fluids. It also functions to maintain structural integrity of the eye, but detailed mechanisms of how it does so had not yet been described.

In a study published online January 12, 2021, in Cell Reports, researchers at the Stowers Institute for Medical Research from the laboratory of Ting Xie, PhD, and collaborators describe how the Notch pathway regulates the secretion of proteins important for supporting eye structure, and also controls the expression of adhesion proteins Nectin1 and Nectin3 to promote the normal structural development of the ciliary body. They find that Nectin proteins ensure expression of the gap junction protein Connexin43, which functions to ensure proper fluid secretion. This work highlights the broad role of the ciliary body in maintenance of eye health and implicates the ciliary body in various eye diseases.

The Stowers Institute for Medical Research is a non-profit, basic biomedical research organization dedicated to basic research – the critical first step in the quest for new medical diagnostics, therapies and treatments. Jim Stowers, founder of American Century Investments, and his wife, Virginia, opened the Institute in 2000. Since then, the Institute has spent over one billion dollars in pursuit of its mission.