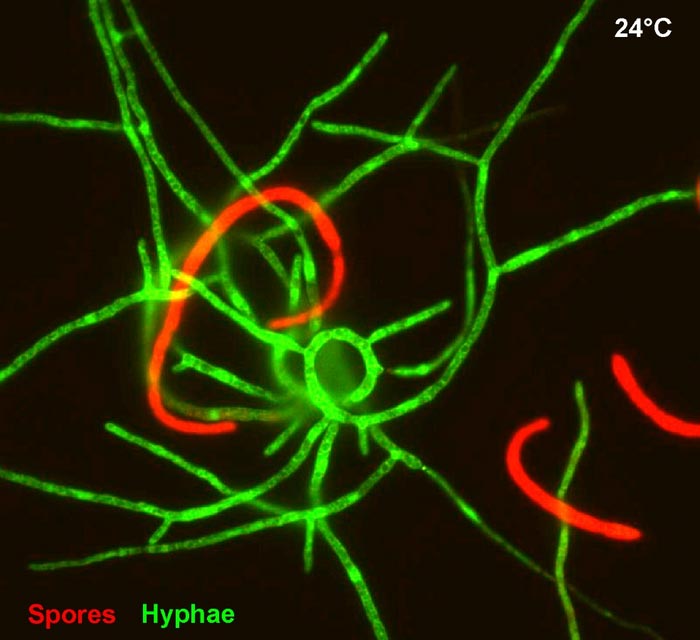 The fungus Zymoseptoria tritici causes Septoria tritici blotch, the most destructive fungal disease of wheat grown in temperate climates worldwide. This disease reduces wheat yields by 5-10% per year, causing harvest losses worth between three quarters and one and a half billion Euros in France, Germany and the UK alone, and with another billion euros being spent on chemical control of the fungus. Researchers from the University of Exeter achieved a major breakthrough in the understanding of molecular mechanisms underpinning the aggressiveness of this pathogen.

Funded by the BBSRC, an Exeter team, led by Professor Gero Steinberg, used a multi-disciplinary approach to better understand the formation of the plant-invasive form of the pathogen. This so-called hyphal stage is when the fungus enters wheat leaves via natural openings, called stomata, which open and shut according to ambient light conditions. Combining cell and molecular biology techniques, bioinformatics and plant pathology, the team revealed that a combination of moderate temperatures and molecules from the wheat leaf initiate the formation of the plant-infecting invasive hyphae. Such a change is accompanied by the “reprogramming” of the pathogen, so preparing the fungus for plant attack.

The development of a novel and sophisticated “molecular tool” enabled the researchers to perform a visual genetic screen that aimed to identify the drivers reprogramming the fungus to form invasive hypha. This approach, rather surprisingly, revealed the existence of a “master regulator”, known in other organisms to sense light. The research showed that this regulator perceives the same light conditions that open the plant stomata, thus initiating and synchronising the emergence of the invasive hypha when the plant is most vulnerable.

The discovery of one “master regulator” for pathogenicity in the wheat pathogen Zymoseptoria tritici is highly significant; it provides a crucial target for the development of new control strategies against Septoria tritici blotch in wheat.

“Our multi-disciplinary approach targeted the core of pathogenicity of the Septoria tritici blotch fungus. Having identified the factor that controls formation of the invasive form of the pathogen provides hope for developing ways to protect our wheat crops against this economically important disease,” said Professor Gero Steinberg.

Professor Sarah J. Gurr, who was part of the Exeter team behind this discovery and holds a Chair in Food Security at the University of Exeter, said: “Wheat is grown over more land area than any other global crop. This disease causes huge losses of this precious calorie crop in temperate growing areas. This research describes the identification of a very significant target in our quest to ensure global food security.”

The study was funded by the Biotechnology and Biological Sciences Research Council (grant BB/P018335/1). SJG is CIFAR Fellow in The Fungal Kingdom Threats and Opportunities initiative.