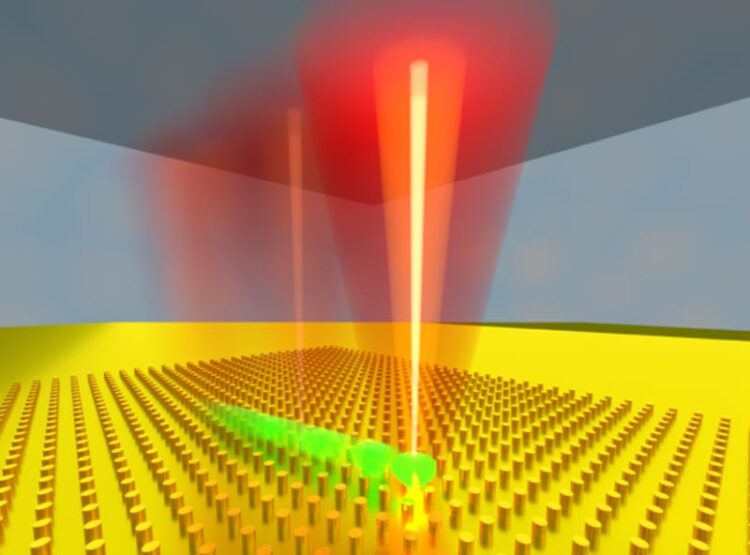 Led by Justus Ndukaife, assistant professor of electrical engineering, Vanderbilt researchers are the first to introduce an approach for trapping and moving a nanomaterial known as a single colloidal nanodiamond with nitrogen-vacancy center using low power laser beam. The width of a single human hair is approximately 90,000 nanometers; nanodiamonds are less than 100 nanometers. These carbon-based materials are one of the few that can release the basic unit of all light—a single photon—a building block for future quantum photonics applications, Ndukaife explains.

Currently it is possible to trap nanodiamonds using light fields focused near nano-sized metallic surfaces, but it is not possible to move them that way because laser beam spots are simply too big. Using an atomic force microscope, it takes scientists hours to push nanodiamonds into place one at a time near an emission enhancing environment to form a useful structure. Further, to create entangled sources and qubits—key elements that improve the processing speeds of quantum computers—several nanodiamond emitters are needed close together so that they can interact to make qubits, Ndukaife said.

“We set out to make trapping and manipulating nanodiamonds simpler by using an interdisciplinary approach,” Ndukaife said. “Our tweezer, a low frequency electrothermoplasmonic tweezer (LFET), combines a fraction of a laser beam with a low-frequency alternating current electric field. This is an entirely new mechanism to trap and move nanodiamonds.” A tedious, hours-long process has been cut down to seconds, and LFET is the first scalable transport and on-demand assembly technology of its kind.

Ndukaife’s work is a key ingredient for quantum computing, a technology that will soon enable a huge number of applications from high resolution imaging to the creation of unhackable systems and ever smaller devices and computer chips. In 2019, the Department of Energy invested $60.7 million in funding to advance the development of quantum computing and networking.

“Controlling nanodiamonds to make efficient single photon sources that can be used for these kinds of technologies will shape the future,” Ndukaife said. “To enhance quantum properties, it is essential to couple quantum emitters such as nanodiamonds with nitrogen-vacancy centers to nanophotonic structures.”

Ndukaife intends to further explore nanodiamonds, arranging them onto nanophotonic structures designed to enhance their emission performance. With them in place, his lab will explore the possibilities for ultrabright single photon sources and entanglement in an on-chip platform for information processing and imaging.

“There are so many things we can use this research to build upon,” Ndukaife said. “This is the first technique that allows us to dynamically manipulate single nanoscale objects in two dimensions using a low power laser beam.”

The research was supported by the National Science Foundation grant ECCS-1933109.

The article, “Electrothermoplasmonic Trapping and Dynamic Manipulation of Single Colloidal Nanodiamond”  was published in the journal Nano Letters on June 7 and was coauthored by graduate students in Ndukaife’s lab, Chuchuan Hong and Sen Yang, as well as their collaborator, Ivan Kravchenko at Oak Ridge National Laboratory.