A Food Chain in the Dark 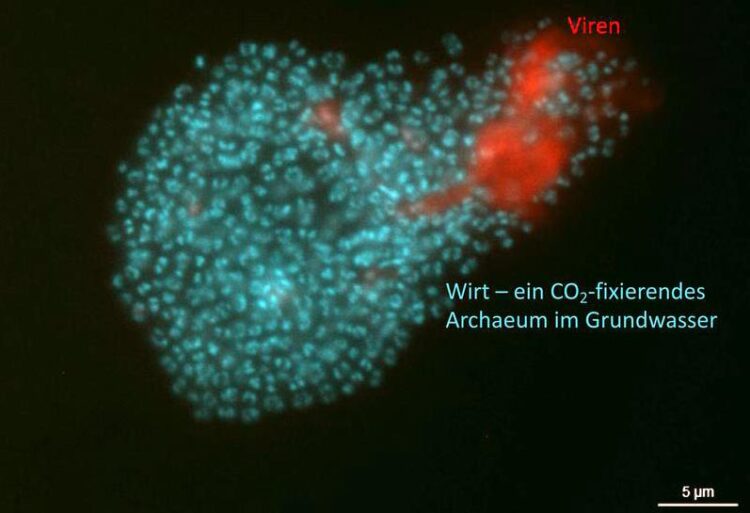 The discovery is groundbreaking: Previously unknown viruses live in the subsurface of our planet; they infect unicellular microorganisms, the so-called Altiarchaea. The remarkable thing: They start the food chain in an ecosystem that is actually hidden from our eyes. An international team led by Professor Dr. Alexander J. Probst from the University of Duisburg-Essen (UDE) made the respective discovery. The results were published in the scientific journal “Nature Communications” *.

Some Archaea live in the deep subsurface without oxygen, generally have no cell nucleus, and their DNA molecules resides in the cell plasma without a shell. How many different of these single-celled organisms there are and how they influence the biological processes of the earth has only been studied for a few years. Altiarchaeum was discovered as one representative about twenty years ago in a swamp area. It is known that they convert a lot of CO2, which influences the carbon cycle on our planet.

Currently, Professor Probst and the research group found Altiarchaea in the groundwater of the Mühlbach sulfur spring in Isling, Regensburg. They came across unknown viruses that infect the microorganisms, while analyzing water they took from a 35-meter-deep aquifer at the sulfur spring. “We knew that they existed in the groundwater due to microscopic images, now we can also detect them using molecular methods,” says the UDE scientist. In the laboratory, the viral pathogens cannot yet be grown and are therefore nameless.

And what happens, when the unknown viruses invade Altiarchaea? „The viral infection of the host – that is, the Altiarchaeum – means that it gets killed, it dies. However, the dead microorganism is then a food source for other organisms. The infections thus possibly jump-start the organic carbon cycle in the ecosystem“, explains microbiologist Probst. This shows that the viruses have a negative effect on the fixation of CO2 in the earth’s subsurface. And that they prepare the food for other organisms as well.

The study involved scientists from the universities Duisburg-Essen, Munich, Oldenburg and the U.S. Lawrence Berkeley National Laboratory. The team around Probst travels to the sulfur spring in Regensburg several times per year to further investigate Altiarchaea and their viruses.