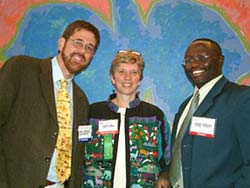 Alice Pell and her Nairobi collaborators, Louis Verchot of the International Centre for Research in Agroforestry (left) and David Mbugua, Cornell Ph.D. Õ03, are studying how small changes in natural resources could have profound effects on the lives of poor villagers. Cornell News Service phto by David BrandCopyright © Cornell University

Madzuu is a village in Kenya’s western highlands and Lake Victoria basin where the rainfall is abundant, and there is some access to urban markets. And yet about 61 percent of the village population earned less than 50 cents a day in real terms in both 1989 and 2002. Many people there are trapped in chronic poverty from which escape is difficult.

Alice Pell, professor of animal science at Cornell University, Ithaca, N.Y., is the principal investigator on a five-year, multidisciplinary research effort to study how small changes in natural resources could have profound effects on people’s lives. In Madzuu’s case, restoring the land’s natural productivity could alter the economic situation of the farmers.

Pell reported on the research team’s first year of work today (Feb. 14) at the annual meeting of the American Association for the Advancement of Science in Seattle. Her talk, “The Interplay Between Small Farms and Fragile Tropical Ecosystems in Kenya,” was part of the “Frontiers in Biocomplexity Science” portion of the “Connections in the Real World” symposium.

In addition to working in the Lake Victoria basin, the researchers are studying a second village, Embu, on the shoulder of Mount Kenya. Both villages have high agricultural potential despite dense populations and small farm size.

Yet there is a big difference between the two villages. In Madzuu, soil degradation is extensive, and more than half the farmers earn less than $205 per capita annually, the Kenyan poverty line. The reason? Madzuu farmers use few soil inputs, such as fertilizers, resulting in loss of rich soil, accelerating the downward, economic spiral, said Pell. “Limited movement out of poverty between 1989 and 2002 in Madzuu suggests the existence of poverty traps,” she said. The soils in Madzuu farmland contain just 16.3 grams per kilogram of soil organic carbon and only 1.6 grams per kilogram of nitrogen. By comparison, preliminary research shows that Embu’s farmers commonly use more fertilizers and other inputs to maintain soil quality. Consequently, Embu cropland contains roughly twice as much soil organic carbon (35.6 grams per kilogram) and nitrogen (3.4 grams per kilogram).