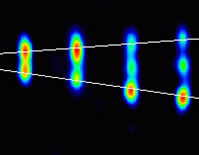 Forty thousand light years away, on the other side of the Milky Way, lies object GRS1915+105. It is a giant star and a black hole orbiting one another, blasting out X-rays and ejecting gas and dust at close to the speed of light.

Now measurements of this “extreme and puzzling” object are casting doubt on current theories of how such binary systems form and behave. Astronomers have weighed its black hole, and found it to be the most massive of its kind in our Galaxy1.

Galactic dust obscures GRS1915 from conventional optical telescopes. So Jochen Greiner and colleagues, of the Astrophysical Institute in Potsdam, Germany looked at the system in infrared wavelengths using a new 8.2-metre telescope at the European Southern Observatory in Chile.

Working out the star’s mass and orbit, they inferred a surprising mass for the black hole. It weighs about 14 times as much as our Sun. That’s nearly twice as much as any other in a similar binary system. (Black holes at the centres of galaxies can be thousands of times heavier still).

A mass of this magnitude challenges the theory that binary black holes arise when exploding stars collapse in on themselves. “It’s almost impossible to form a black hole this massive in a binary system,” says astronomer Robert Hynes of the University of Southampton, UK.

The theoretical headaches don’t stop there. The disk of matter surrounding the black hole, flowing in from its companion star, is unusually hot. To explain this, some have suggested that the hole is spinning, allowing matter to approach and heat up before vanishing into it. The death throes of this matter make GRS1915 the brightest X-ray source in the Galaxy.

But a spinning black hole of this mass creates a theoretical logjam with suggested explanations for the pattern of X-ray blasts. “If a spinning hole explains the temperature, then the [X-ray] theories are wrong, or vice versa,” says Greiner.

The discovery of similar objects not currently emitting X-rays may help to fill the gaps in our understanding, suggests Alberto Castro-Tirado, of the Astrophysical Institute of Andalucia. Castro-Tiroda was a member of the team that discovered GRS1915. “There are probably other objects like this, but they remain in a state of hibernation”, he says.