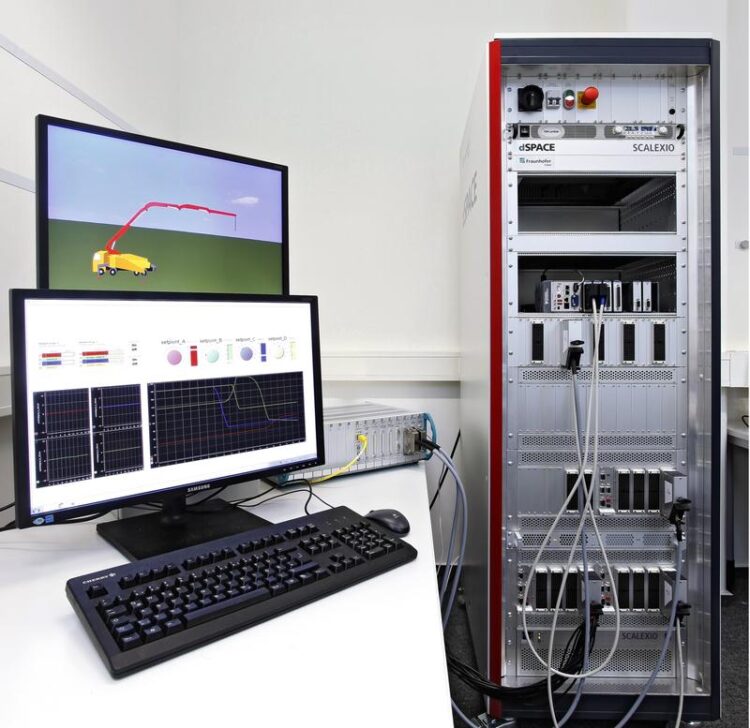 The Fraunhofer ITWM HiL platform enables data collection and generation for many signal types as well as complex fault simulations. The control algorithms can be integrated into its own control units or the customer’s original systems.
© Fraunhofer ITWM

The process of developing new generations of commercial vehicles and heavy equipment is complex. The hardware-in-the-loop technique gives researchers at Fraunhofer-Gesellschaft the opportunity to reproduce and virtually test machines in a software simulation, making machine development faster and more affordable. This technology also enables the testing of malfunctions and critical borderline situations without endangering people or the machine.

Heavy equipment is a familiar sight on streets in every city: It is used to excavate earth for subway tunnels, level roads and lift extremely heavy loads to dizzying heights. With tasks as demanding as these, they not only need to be robust and powerful but also extremely reliable, precise and safe. Tower cranes can hoist tool containers that weigh tons hundreds of meters into the air and deposit them on a high-rise building platform with centimeter precision, all in the heart of a densely populated city. Developing equipment like this and testing the prototypes is thus a complex and expensive undertaking.

The Fraunhofer Institute for Industrial Mathematics ITWM in Kaiserslautern offers support with an extraordinary test bench based on a hardware-in-the-loop (HiL) simulator. In principle, any machine and its controls can be connected to software simulation and tested virtually. In the automotive industry, HiL is already a standard tool in the development of new models. But that is not yet the case with commercial vehicles. However, Fraunhofer researchers discovered years ago that the commercial vehicle industry has very similar requirements due to diminishing innovation cycles, increasingly modular designs and digitization of control systems, and have thus adopted these testing concepts. “Our HiL simulator allows us to test heavy equipment of all kinds, including a variety of crane types and concrete pumps. This allows us to help optimize prototypes,” explains Project Manager Dr. Christian Salzig. A real test environment is no longer necessary.

The machine’s digital twin in the simulator

In the first step, the machine to be tested is reproduced as a software model, incorporating all of the technical specifications, which include dimensions, engine performance data, support structure strength, weight distribution, the angles at which the jibs move, jib length and much more. The physical laws of mechanics, hydraulics and electronics such as forces, pressures and control signals are integrated into the software as mathematical equations. And thus, a digital twin is created.

In the next step, the simulator with the digital twin is connected to the electronic control units that control machine operation. A specialist operates the numerous controllers and joysticks, which are also connected to the control units. An animated 3D graphic reproduces all of the machine’s movements on a display.

The HiL simulator test reveals the level of precision with which the control unit and machine work together, and how sensitive the control elements such as joysticks are. Modern heavy equipment features a whole host of sensors, which register values such as the torque and acceleration of the jibs, pressure, the weight applied to the cables, and the incline of the ground below the machine. Here, too, the simulation shows whether the sensor-based communication between the machine and control unit is precise and instantaneous. Technical faults can also be simulated. For example, what happens if a cable breaks at a joint or there is a loss of pressure in the lifting element hydraulics?

Safety plays a key role when it comes to operating commercial vehicles and heavy equipment. “Manufacturers want to know what their machine is capable of in borderline situations and at what point things could become critical,” says Christian Salzig. For example, the simulator tests what happens if the load begins to sway back and forth or liquids slosh around in a transport container. It also tests how the equipment responds if the ground is unstable or inclined. For example, telescopic platforms need to position their stabilizers in confined spaces. With hardware-in-the-loop tests, product developers can see at which angle the digital twin becomes unstable or even tips over.

In a real environment with actual machines, tests like these would be expensive and risky. The HiL simulator can do this without endangering people or damaging or even destroying expensive prototypes.

With the test bench at Fraunhofer ITWM, manufacturers can assess, improve and optimize the viability and performance of the machine early on in the development stage. There is no need to wait until the first prototype is built: all of the functions and loads can be tested during the concept phase. This process is also referred to as rapid prototyping. Manufacturers of commercial vehicles are thus able to launch new product generations more quickly as well as reduce development costs.

Fraunhofer expert Salzig points out another benefit: “For each new product generation, manufacturers are looking to minimize the use of materials, reduce energy consumption, integrate new functions and make the machine smaller and more mobile.” It is precisely these types of improvement that make hardware-in-the-loop testing possible. The simulation allows experts to find out whether a certain desired characteristic or level of load bearing would also be possible with lower material costs or if the same degree of performance and functionality could also be achieved with a smaller machine. An especially compact mobile crane could then operate, for example, at locations that would be too small for its predecessor model. It would still be able to lift the same loads and reach the same height.

Fraunhofer ITWM experts maintain contact with the manufacturers throughout the complex testing process. “It’s not as if we receive an order, carry out the tests by ourselves and then write a test report a few months later. We work closely together throughout the entire series of tests and discuss future steps with each other,” explains Christian Salzig.

The institute is currently in the process of planning the next expansion: the integration of 5G radio technology. In the years to come, this will play an increasingly large role in the wireless control of industrial machines and devices. Fraunhofer ITWM is now working on an interface that combines the HiL simulator with 5G transmitter and receiver modules.