Home / Information Technology / (Quantum) Whispers above the rooftops of Jena
25.11.2022 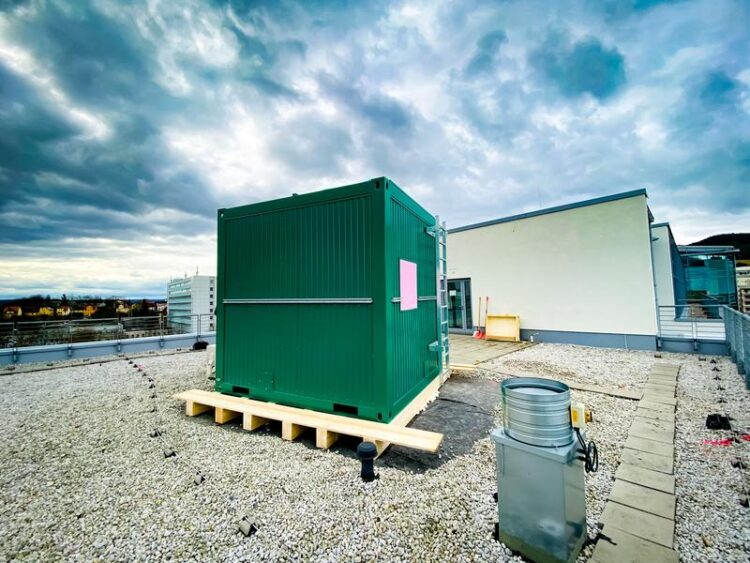 Hidden in the belly of this green container on the roof of the Jena's public utilities is a special telescope for quantum communication.
© Fraunhofer IOF

As the crow flies, the Fraunhofer Institute for Applied Optics and Precision Engineering IOF is 1.7 kilometers away from the Stadtwerke Jena (engl.: public utilities Jena). Over this distance, the institute is using a test link to research the exchange of quantum keys via free beams, i. e. through the air. With the help of this technology, our communication should become highly secure in the future. During the “Lange Nacht der Wissenschaften” (engl.: Long Night of Sciences Jena) on November 25, guests can experience the test link live in action.

High above the rooftops of Jena, on the roof of Jena’s public utilities in Rudolstädter Straße – there it stands: an anonymous, green container. But it’s not so anonymous after all, because the container even has a name – or rather what’s hidden inside it – namely: Bob.

Bob is a telescope, or to be more precise, a receiving station for a local test link for new communication systems. And where data is received, there must also be someone who sends data. That someone is Alice – another telescope. It stands 1.7 kilometers away as the crow flies in a Fraunhofer IOF laboratory on the Beutenberg Campus.

But what are quanta anyway? Quanta are the smallest entities known to us that can cause physical interactions. By following their own laws, they exhibit properties that larger physical systems do not have. It is precisely these special properties that researchers are harnessing in a wide variety of application fields. One such field of application is quantum communication.

Quantum communication is a new type of communication system that makes it virtually impossible to eavesdrop on data without being noticed. For this reason, quantum communication is already of great interest today for all those applications where sensitive data must be protected and archived over the long term, e.g., data from authorities and government institutions, citizens’ health data, or even account and bank data.

The Fraunhofer IOF has been dedicated to researching quantum communication for several years. With a local test link between the institute’s building and the Jena public utilities, the exchange of so-called quantum keys via free beams, i. e. through the air, has been researched since 2021. The test link allows researchers to quickly and easily test the latest systems for quantum communication in a real and application-oriented environment – such as photon sources, telescope optics or special measurement systems.

Already in 2021, the researchers successfully exchanged a quantum-safe key between the two sites on the test link for the first time. The key ensures that no third party can eavesdrop on the communication between Bob and Alice without being noticed. The scientists achieved key generation rates of up to 2,000 bytes per second. For the exchange of a quantum key within an urban area, this generation rate is among the highest in the world. It would be sufficient, for example, to encrypt a telephone call within a city in a highly secure manner without any problems.

The proof that quantum communication works demonstrably securely has thus been provided by the Fraunhofer IOF staff. Their next step is to investigate how the hardware needed to distribute the keys can be produced more efficiently and cost-effectively in the future. This is the only way to develop prototypes that can be used in industry and commerce and thus enable the spread of quantum communication in everyday life. In particular, the QuNET initiative, a pilot project funded with 125 million euros by the German Federal Ministry of Education and Research (BMBF) and coordinated at the Fraunhofer IOF, has set itself the goal of creating a basis for secure and robust IT networks that are already equipped today against cyber-attacks of tomorrow. The first users of this new type of quantum communication are expected to be public authorities or banks.

Although this means that the first major milestone has already been reached on the test link, there are still numerous challenges that the researchers must face on the way to practical quantum communication in everyday life. Accordingly, the use of quantum communication is currently limited to nighttime only, for example, when the exchange of quantum keys cannot be affected by sunlight. To counteract this, the Jena researchers are currently working on special filters. In the future, they should enable the system to work independently of light conditions and thus also during the day.

In addition, the team plans to implement a so-called heterogeneous network in the medium term. This will involve coupling the free-beam link with a fiber link between Jena and Erfurt. Just in September, researchers successfully exchanged quantum keys for the first time on the 75 km long fiber link (see our press release of September 21, 2022).

By combining free-beam and fiber technology, quantum communication will in future be usable not only over comparatively short distances, for example in inner-city areas, but also in larger metropolitan regions. With the help of transmitters on miniature satellites stationed in space, which are also being developed at Fraunhofer IOF in Jena, secure connections across the entire planet will also be possible in the long term.

On the “Long Night of Sciences” (LNdW) on November 25, guests can experience the test link live in action starting at 6 pm: On the roof of the public utilities, where the quantum telescope Bob is located, a red light will flash. The light signal will be visible for miles across the city, all the way to the Beutenberg. Visitors to the Fraunhofer IOF are invited to decode the signals that send a message from the public utilities over to the institute, and in the process familiarize themselves with the secrets of quantum communication.