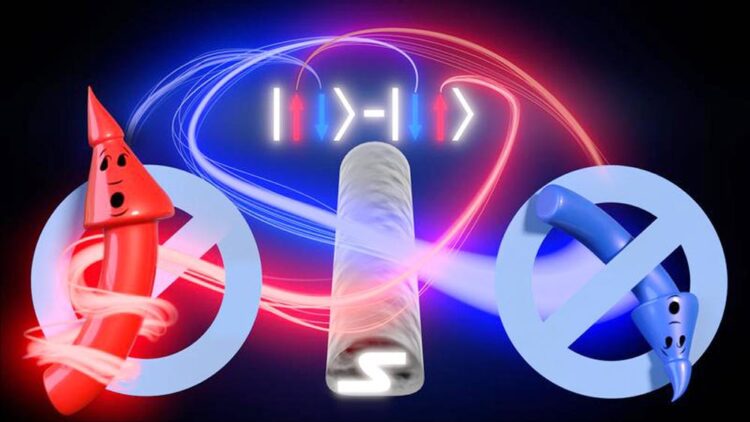 Electrons leave a superconductor only as pairs with opposite spins. If both electron paths are blocked for the same type of spin by parallel spin filters, paired electrons from the superconductor are blocked and the currents decrease.
Credit: Scixel / University of Basel, Department of Physics

Physicists at the University of Basel have experimentally demonstrated for the first time that there is a negative correlation between the two spins of an entangled pair of electrons from a superconductor. For their study, the researchers used spin filters made of nanomagnets and quantum dots, as they report in the scientific journal Nature.

Two electrons can be entangled as well – for example in their spins. In a superconductor, the electrons form so-called Cooper pairs responsible for the lossless electrical currents and in which the individual spins are entangled.

For several years, researchers at the Swiss Nanoscience Institute and the Department of Physics at the University of Basel have been able to extract electron pairs from a superconductor and spatially separate the two electrons. This is achieved by means of two quantum dots – nanoelectronic structures connected in parallel, each of which only allows single electrons to pass.

Opposite electron spins from Cooper pairs

The team of Prof. Dr. Christian Schönenberger and Dr. Andreas Baumgartner, in collaboration with researchers led by Prof. Dr. Lucia Sorba from the Istituto Nanoscienze-CNR and the Scuola Normale Superiore in Pisa have now been able to experimentally demonstrate what has long been expected theoretically: electrons from a superconductor always emerge in pairs with opposite spins. 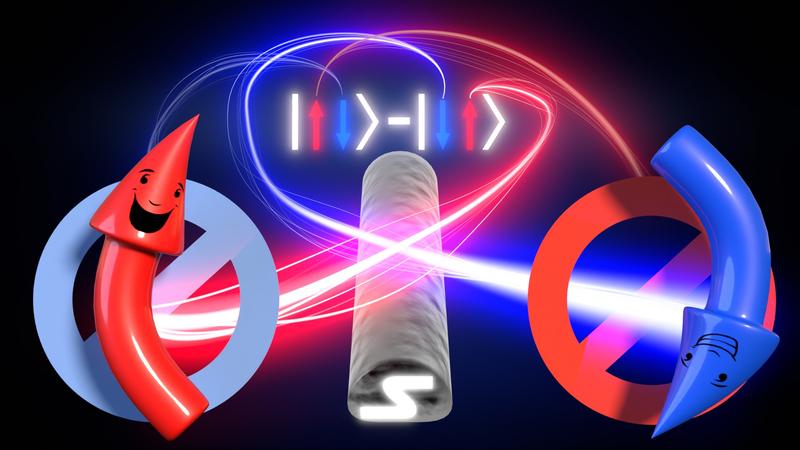 In contrast to parallel spin filters, for antiparallel spin filters electron pairs are allowed to exit the superconductor, which can be detected as significantly enhanced electrical currents in both paths. Credit: Scixel / University of Basel, Department of Physics

Using an innovative experimental setup, the physicists were able to measure that the spin of one electron points upwards when the other is pointing downwards, and vice versa. “We have thus experimentally proven a negative correlation between the spins of paired electrons,” explains project leader Andreas Baumgartner.

The researchers achieved this by using a spin filter they developed in their laboratory. Using tiny magnets, they generated individually adjustable magnetic fields in each of the two quantum dots that separate the Cooper pair electrons. Since the spin also determines the magnetic moment of an electron, only one particular type of spin is allowed through at a time.

“With this method, we were able to detect such negative correlations between electron spins from a superconductor for the first time,” Andreas Baumgartner concludes. “Our experiments are a first step, but not yet a definitive proof of entangled electron spins, since we cannot set the orientation of the spin filters arbitrarily – but we are working on it.”

The research, which was recently published in Nature, is considered an important step toward further experimental investigations of quantum mechanical phenomena, such as the entanglement of particles in solids, which is also a key component of quantum computers.