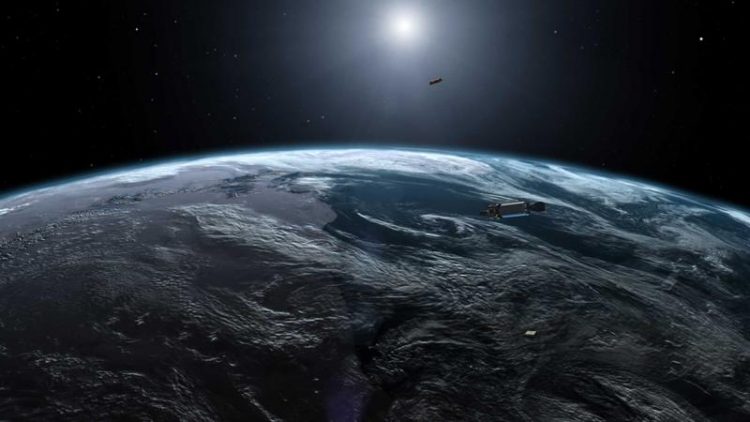 A few months ago, the GRACE mission’s two Earth observation satellites burnt up in the atmosphere. Although this loss was planned, for the experts at the Alfred Wegener Institute it left a considerable gap in monitoring ice loss in the Antarctic and Greenland. Now the follow-up mission will finally be launched, and will play a vital role in predicting future sea level rise.

Without a doubt, one of the greatest threats in connection with climate change is the continuing rise in sea level – and the more intensively the enormous ice sheets in Greenland and the Antarctic melt, the worse it will become.

For them, the GRACE satellites were an extremely important pair of spacecraft. They had been in orbit since 2002, but in 2017, at the ripe old age of 15 they were decommissioned, and early this year they made a controlled re-entry into the Earth’s atmosphere, where they burnt up as planned. Ever since then, the AWI experts and the international research community have had to do without an important source of information on the condition of the large ice sheets.

And now, to fill that gap, at 12:47 p.m. PST on 22 May 2018, the successor, GRACE Follow-On (GRACE-FO) will be launched into orbit from Vandenberg Air Force Base in California (USA). “We’re delighted,” says AWI geophysicist Ingo Sasgen.

“For 15 years, the GRACE mission provided us with unique and fascinating time sequences on the ice sheets’ mass losses. Since June 2017, this time sequence has been interrupted, which means that we don’t have any data on the last melt season in Greenland. It’s very good news that the measurements are now going to be continued.”

GRACE stands for “Gravity Recovery And Climate Experiment”. As the name suggests, the satellites' task is to measure the Earth’s gravitational field on a monthly basis. This gravity data can then be used by various experts for different purposes. It is particularly important for the AWI’s researchers, because the changes in ice mass in Greenland and the Antarctic can be clearly seen in the Earth’s gravitational field.

If more ice is lost as a result of melting or calving than can be recovered through snowfall, the mass of the ice sheet decreases, and so does the gravitational field in that area. Accordingly, the GRACE measurements can tell us whether or not, where, and by how much the ice sheets shrink or grow.

The two GRACE satellites employ a microwave radar system to permanently measure the distance between them, and normally fly approximately 220 kilometres apart. If the first satellite flies over an area with higher gravity, it is slightly attracted and thereby accelerated.

This increases its distance from the second satellite, and the discrepancy shows how great the change in gravity is within a radius of circa 400 km. The accuracy of this approach is extraordinary – it can measure the distance between the twin satellites to within a few micrometres.

The new GRACE mission will also rely on microwave radar. “To allow the second mission to launch quickly and not to lose too much time and risk gaps in the data, the choice was made to use tried and trusted technologies,” explains Ingo Sasgen. “However, there is also a laser measuring device on board, which will be tested during the mission. Roughly 25 times more accurate than the microwave radar, we believe it can further improve the gravitational field analysis.”

As with the previous mission, the German Research Centre for Geosciences (GFZ) and NASA are providing the scientific support for the GRACE-FO mission. The German Aerospace Center will carry out the mission on behalf of the GFZ. In turn, the AWI will contribute not only its ice expertise, but also two million euros to help cover the cost of the Falcon 9 booster rocket from SpaceX.

The data provided by GRACE-FO will be essential, as it will not only allow Ingo Sasgen and his colleagues to help determine how major ice sheets are responding to the on-going global warming; they will also feed the data into mathematical models known as numerical climate models to predict how ice losses will evolve over time.

Further, GRACE-FO will conduct high-precision gravity-field measurements, which experts at the AWI will combine with readings from other satellites, e.g. CryoSat-2, which uses radar to accurately measure the thickness of sea-ice cover. CryoSat-2 can be used e.g. to identify which parts of an ice sheet had the most snowfall. In addition, GRACE-FO will scan 400-kilometre grid sections, which is comparatively coarse. Measuring five-kilometre sections on average, CryoSat-2 offers significantly higher resolution. But CryoSat-2 has limitations of its own: its radar sweep also penetrates into the upper layers of snow and ice, making it difficult to precisely measure their thickness, especially since the exact conditions on-site are unknown.

To compensate for this aspect, the AWI also takes calibration readings with its research aircraft. A further source of uncertainty: over time, snow collapses under its own weight, which can skew measurements of its thickness. According to Ingo Sasgen, “With the CryoSat-2 data alone, it’s impossible to say whether a change in the thickness of ice and snow was produced by the snow compacting, or by melting. That’s why we need GRACE Follow-On; the respective change in the gravitational field shows us whether or not ice and snow are actually being lost.” In essence, the satellites constitute a perfect match, as they offer complementary strengths.

With the start of the GRACE-FO mission, after roughly a year an important gap in satellite monitoring will become a thing of the past. As with its predecessor, the planned mission duration is five years. But Ingo Sasgen hopes that the second generation, just like the first, might continue to provide data for as long as 15 years. “We would then have a time series covering roughly 30 years, which would mean a truly representative timespan for climate models. The data gained will be a valuable resource for climate research, today and for decades to come.”

Printable images and graphics are available in the online version of this press release at: https://www.awi.de/nc/en/about-us/service/press.html