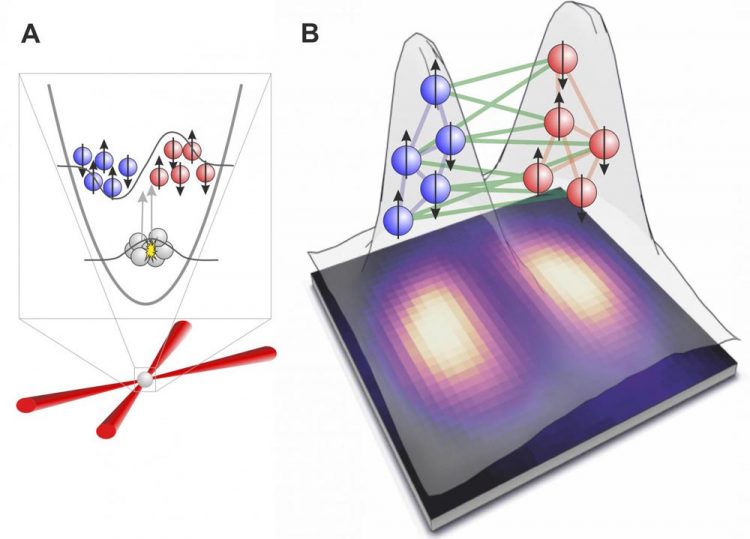 Illustration of the quantum entanglement achieved between the two clouds of atoms starting from a single Bose-Einstein condensate. Credit: Iagoba Apellaniz. UPV/EHU

The prestigious journal Science has echoed a novel experiment in the field of quantum physics in which several members of the Quantum Information Theory and Quantum Metrology research group of the Department of Theoretical Physics and History of Science at the UPV/EHU's Faculty of Science and Technology participated, led by Géza Tóth, Ikerbasque Research Professor, and carried out at the University of Hannover. In the experiment, they achieved quantum entanglement between two ultra-cold atomic clouds, known as Bose-Einstein condensates, in which the two ensembles of atoms were spatially separated from each other.

Quantum entanglement was discovered by Schrödinger and later studied by Einstein and other scientists in the last century. It is a quantum phenomenon that has no counterparts in classical physics. The groups of entangled particles lose their individuality and behave as a single entity. Any change in one of the particles leads to an immediate response in the other, even if they are spatially separated. “Quantum entanglement is essential in applications such as quantum computing, since it enables certain tasks to be performed much faster than in classical computing,” explained the leader of the Quantum Information Theory and Quantum Metrology group Géza Toth.

Unlike the way in which quantum entanglement between clouds of particles has been created up to now, and which involves using incoherent and thermal clouds of particles, in this experiment they used a cloud of atoms in the Bose-Einstein condensate state. As Tóth explained, “Bose-Einstein condensates are achieved by cooling down the atoms to very low temperatures, close to absolute zero. At that temperature, all the atoms are in a highly coherent quantum state; in a sense, they all occupy the same position in space. In that state quantum entanglement exists between the atoms of the ensemble.” Subsequently, the ensemble was split into two atomic clouds. “We separated the two clouds from each other by a distance, and we were able to demonstrate that the two parts remained entangled with each other,” he continued.

The demonstration that entanglement can be created between two ensembles in the Bose-Einstein condensate state could lead to an improvement in many fields in which quantum technology is used, such as quantum computing, quantum simulation and quantum metrology, since these require the creation and control of large ensembles of entangled particles. “The advantage of cold atoms is that it is possible to create highly entangled states containing quantities of particles outnumbering any other physical systems by several orders of magnitude, which could provide a basis for large scale quantum computing,” said the researcher.

The experiment was carried out at the University of Hannover by Carsten Klempt and the members of his group Karsten Lange, Jan Peise, Bernd Lücke and Ilka Kruse. The group of Géza Tóth of the Department of Theoretical Physics and History of Science at the UPV/EHU, included Giuseppe Vitagliano, Iagoba Apellaniz and Matthias Kleinmann; they developed a criterion that verified the presence of quantum entanglement.