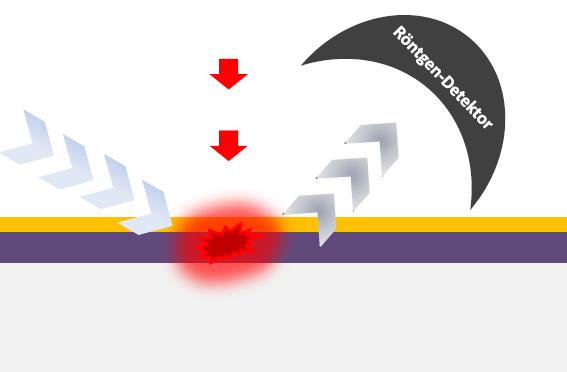 The laser pulse (red) generates heat in the thin-film system. The physical mechanisms by which the heat is distributed can be analysed by temporally resolved X-ray diffraction experiments. Credit: HZB/University Potsdam

A team led by Prof. Matias Bargheer from the University of Potsdam, who heads a Joint Research Group on ultrafast dynamics at the HZB, has now closely examined heat transport in a metallic-magnetic model system.

The model system consists of a nanometre-thin ferromagnetic nickel layer (12.4 nm) applied to a magnesium oxide substrate, with an even thinner layer of gold (5.6 nm) deposited over the nickel. Using an ultra-short laser pulse (50 femtoseconds), the physicists introduced heat locally into the model system, then with extremely short X-ray pulses (200 femtoseconds), determined how the heat was distributed in the two nanolayers over time. The first discovery: The model system does not take the roughly one picosecond to reach thermal equilibrium as expected, but instead a hundred times longer.

The sequence of measurements showed exactly what happens: “Although the laser first hits the layer of gold, the crystal lattice of the gold remains cool. Almost 90 per cent of the energy is transferred to the nickel electrons and introduced at that point into the nickel crystal lattice”, reports Bargheer.

However, since the heat conduction through the now warmer but poorly conducting nickel crystal lattice directly to the cooler gold crystal lattice is very low, the thermal energy finds another pathway from the warmer nickel lattice to the cooler gold lattice. In order to reach thermal equilibrium, thermal energy flows back from the nickel lattice via the nickel electrons to the gold electrons that in turn excite the gold lattice vibrations.

“With this experimental set-up, we have been able to show that it is worthwhile analysing these kinds of transport processes in the temporal domain. We are therefore very pleased that we will soon be able to carry out such experiments at the much more powerful BESSY II X-ray source that will be upgraded to BESSY-VSR and then simultaneously offer very short, yet intense X-ray pulses”, says Bargheer.

Future data memories based on what are referred to as heat-assisted magnetic recording techniques (HAMR) can be locally heated and overwritten with laser pulses. With a deeper understanding of the transport processes, such systems might be able to be developed in such a way that they can manage with minimal input energy.