Home / Information Technology / Changing the color of quantum light on an integrated chip
02.12.2022 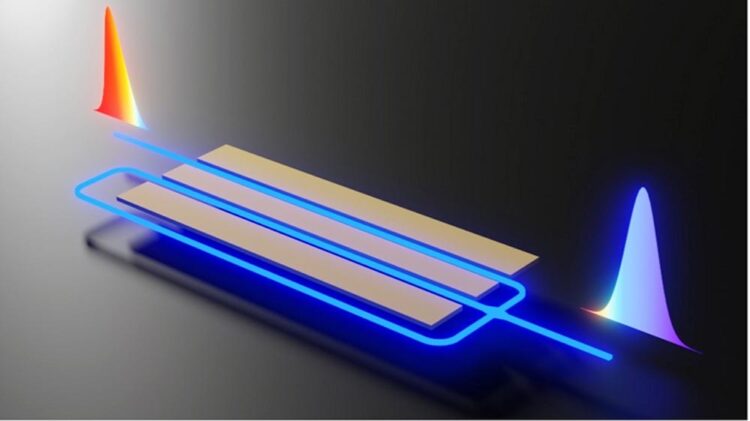 Optical photons are ideal carriers of quantum information. But to work together in a quantum computer or network, they need to have the same color — or frequency — and bandwidth. Changing a photon’s frequency requires altering its energy, which is particularly challenging on integrated photonic chips.

Recently, researchers from the Harvard John A. Paulson School of Engineering and Applied Sciences (SEAS) developed an integrated electro-optic modulator that can efficiently change the frequency and bandwidth of single photons. The device could be used for more advanced quantum computing and quantum networks.

The research is published in Light: Science & Applications.

Converting a photon from one color to another is usually done by sending the photon into a crystal with a strong laser shining through it, a process that tends to be inefficient and noisy. Phase modulation, in which photon wave’s oscillation is accelerated or slowed down to change the photon’s frequency, offers a more efficient method, but the device required for such a process, an electro-optic phase modulator, has proven difficult to integrate on a chip.

One material may be uniquely suited for such an application — thin-film lithium niobate.

“In our work, we adopted a new modulator design on thin-film lithium niobate that significantly improved the device performance,” said Marko Lončar, the Tiantsai Lin Professor of Electrical Engineering at SEAS and senior author of the study. “With this integrated modulator, we achieved record-high terahertz frequency shifts of single photons.”

The team also used the same modulator as a “time lens”— a magnifying glass that bends light in time instead of space — to change the spectral shape of a photon from fat to skinny.

“Our device is much more compact and energy-efficient than traditional bulk devices,” said Di Zhu, the first author of the paper. “It can be integrated with a wide range of classical and quantum devices on the same chip to realize more sophisticated quantum light control.”

Di is a former postdoctoral fellow at SEAS and is currently a research scientist at the Agency for Science, Research and Technology (A*STAR) in Singapore.

Next, the team aims to use the device to control the frequency and bandwidth of quantum emitters for applications in quantum networks.

The research was a collaboration between Harvard, MIT, HyperLight, and A*STAR.