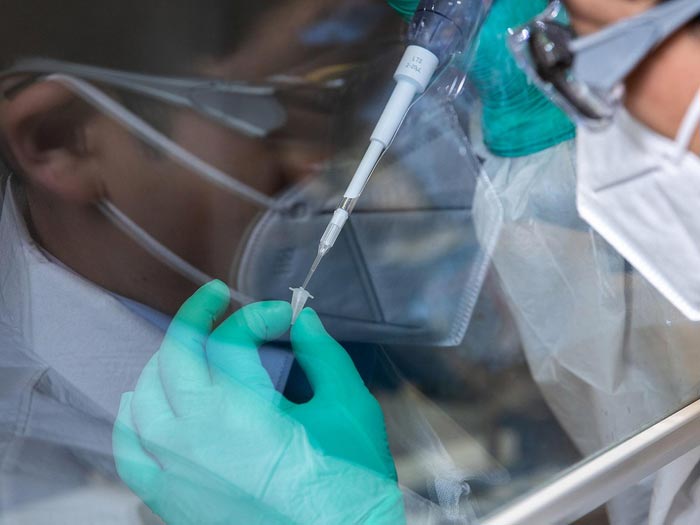 New research helps explain the progression of Alzheimer’s disease and predicts its severit.

Alzheimer’s disease has always had its puzzles and contradictions. For Pacific Northwest National Laboratory (PNNL) researcher Vladislav Petyuk, whose research on the progressive, age-related disease spans over a decade, some of the struggles have come from studies where “we can only connect the dots a pair at a time.”

Petyuk’s research touches multiple areas in biological and computational science at PNNL. He has produced dozens of publications on Alzheimer’s disease. But now he sees the needle moving in the right direction.

“Over the last 10 years,” Petyuk said, “research has been moving away from a single drug target towards focusing more on the proteins that have a role in cognitive resilience.”

Cognitive resilience is a measure of the brain’s ability to continue to work even with a high Alzheimer’s disease neuropathology that would normally produce the hallmark dementia. This means that, in some people, the brain shows the symptoms of the disease, but it does not impact the person’s ability to function. What makes some brains sensitive, and some resilient, is an open question.

Petyuk recently collaborated with a multi-institutional team in a study that examined a large Alzheimer’s disease cohort of over 1800 people. The researchers drew on previously collected blood samples and brain tissue, along with large-scale data analysis to search for central themes in early identification, prevention, and treatment of the disease.

The research findings published in Science Advances (November 2022), help explain the progression of Alzheimer-related dementia in each patient. Further, the findings outline a multilevel biological classification system that predicts disease severity and future neurological symptoms. “Assessment of a patient’s brain and blood proteins, and other biological molecules, reveal patterns that can then be targeted for tailored intervention,” said Petyuk.

The discovery is particularly timely, as November is Alzheimer’s disease awareness month. In the United States, 5.4 million people aged 65 and older live with Alzheimer’s disease. The numbers grow annually as the population ages.

Proteomics research at PNNL involves, among other things, the ability to analyze very large data sets. Examining, identifying, and discovering proteins can answer specific biological questions about their role in the disease, as well as identifying multiple new drug targets in the fight against Alzheimer’s disease and related dementias.

Leveraging PNNL’s advanced proteomics platform capabilities to answer these big questions to fill in the knowledge gaps, Petyuk has contributed to six published research studies in this year alone. The work validates the power of discovery in the proteomics platform at PNNL, as well as the power in the collaborative efforts of Petyuk’s colleagues from all over the world.

Putting together pieces of the Alzheimer’s puzzle

Some symptoms of the disease are due to the misfolding of proteins. Proteins need to have a specific shape to function correctly, and much like baking a cake, changing the recipe can result in a misshapen product. Alzheimer’s disease can cause protein recipes to change. This research adds to the emerging body of work on proteins involved in cognitive decline that are associated with the disease. These proteins may indicate potential new targets for drug therapies.

Even with such a large body of work, the puzzle still only gets put together one piece at a time, with lots of smaller parts that make sense, but a yet-to-be-discovered larger view. Petyuk, along with team lead Yasser Iturria-Medina at the Montreal Neurological Institute of the McGill University, continue work that adds to our understanding of a complex and devastating disease. This promises new discoveries, and new pieces to add to the puzzle of Alzheimer’s disease.

Pacific Northwest National Laboratory draws on its distinguishing strengths in chemistry, Earth sciences, biology and data science to advance scientific knowledge and address challenges in sustainable energy and national security. Founded in 1965, PNNL is operated by Battelle for the Department of Energy’s Office of Science, which is the single largest supporter of basic research in the physical sciences in the United States. DOE’s Office of Science is working to address some of the most pressing challenges of our time. For more information, visit https://energy.gov/science. For more information on PNNL, visit PNNL’s News Center. Follow us on Twitter, Facebook, LinkedIn and Instagram.