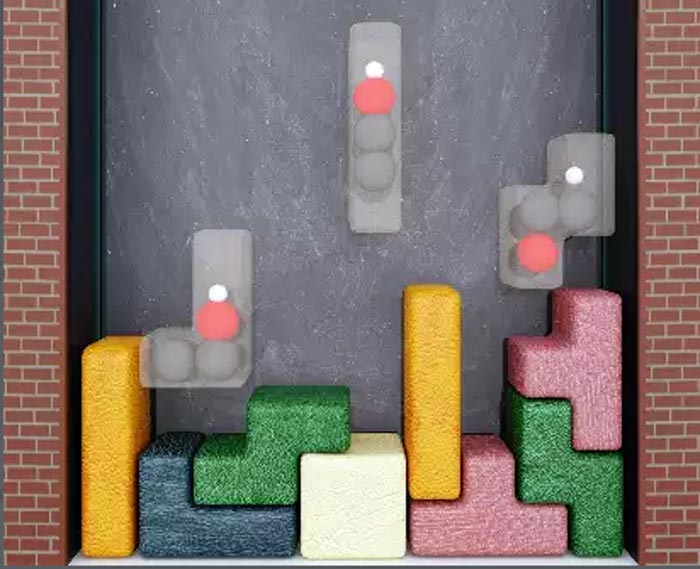 Researchers from Aarhus and Berlin have developed a new algorithm that can teach computers to predict how complex molecules will bind to the surface of catalysts. It’s almost llike playing extreme Tetris.

Imagine a game of Tetris where you not only have to stack the pieces in three dimensions, but the pieces are also much more complicated than the seven geometric shapes you normally use in the game.

In this case, the pieces are large and complex molecules that are to bind to another material in a chemical reaction.

To make things even harder, both the molecules and the other material have several places on the surface where they can bind to each other – and it is crucial that the binding is neither too weak nor too strong.

The binding has to be exactly right, otherwise the other material cannot function as a catalyst (see fact box at the end of the text).

Such an extreme game of Tetris perfectly illustrates the challenges that researchers all over the world encounter when working on developing new and better catalysts for a wide range of technical-chemical processes.

Researchers from Aarhus University and the Fritz Haber Institute in Berlin have developed a machine-learning algorithm that can teach computers to predict how molecules will bind to the surface and how strongly they will bind.

The results have recently been published in the journal Nature Computational Science.

The algorithm can assist in predicting efficiently and accurately whether a given material lends itself as a catalyst for chemical reactions involving many different complex molecules.

This is important because the first step in developing new and better catalysts is to establish whether a new material is even a promising catalyst for a desired reaction. The next step, synthesising the material, is often too expensive and difficult for just experimenting with different materials through trial and error in the laboratory.

… for the green transition

The goal of the collaboration between Aarhus and Berlin was to find a quick and efficient way of screening potential catalysts. Specifically catalysts that can be used to synthesise green fuels such as methanol, ethanol and liquid methane.

To make such chemical processes economically viable there is an ever-increasing need for new and better catalysts.

One of the challenges is that these reactions typically involve so many different and complex molecules that not even a supercomputer would be able to screen the candidates. A supercomputer performs a quantum mechanical calculation of the binding strength for each possible position of the molecule on the catalyst’s surface, and that would simply take far too long.

However, using machine learning we can train algorithms with the results of previous calculations for similar molecules and catalyst surfaces to make reliable predictions about bindings without the need for additional supercomputer time, thus making the process much faster.

“It’s comparable to an experienced Tetris player developing the ability to intuitively place the pieces without analysing each of them individually as they drop down,” explains Wenbin Xu, a PhD student at the Fritz Haber Institute.

The new algorithm is already providing accurate binding information for large and complex molecules that are central to the reactions that can produce synthetic fuels.

Artificial intelligence and machine learning are not new inventions, but so far, existing algorithms have only been able to predict the binding of small molecules that bind with one obvious orientation to the surface – just like a simple square Tetris piece.

So what makes this new algorithm different from the others?

“The problem with existing algorithms was that they didn’t have the information where the individual atom was located geometrically in the molecule, and how it was bound to the molecule’s other atoms and to the atoms on the catalyst’s surface. Our new machine learning algorithm, which is based on mathematical graph theory, can extract this information and use it effectively,” explains Mie Andersen, a Fellow at the Aarhus Institute of Advanced Studies (AIAS) and Associate Professor at the Department of Physics and Astronomy at Aarhus University, as well as a member of the department’s Centre for Interstellar Catalysis.

Can also be used for research into the origins of life

The new algorithm may even impact our understanding of how life began on Earth. That is because it can help determine how nanosize interstellar dust grain particles function as catalysts in the chemical processes that cause gases in space to form complex molecules such as the DNA bases and amino acids on which life on Earth is based.