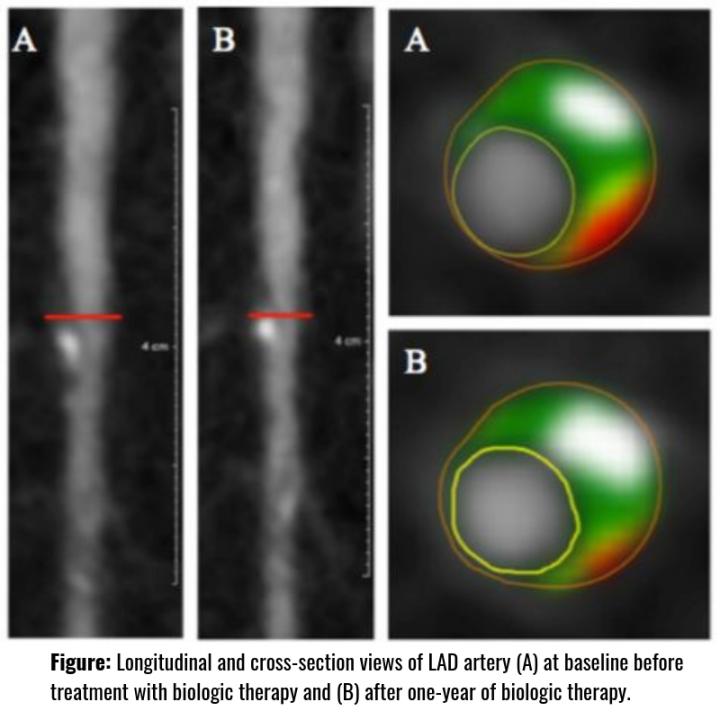 “Classically a heart attack is caused by one of five risk factors: diabetes, hypertension, high cholesterol, family history, or smoking,” said Nehal N. Mehta, M.D., head of the Lab of Inflammation and Cardiometabolic Diseases at NHLBI.

“Our study presents evidence that there is a sixth factor, inflammation; and that it is critical to both the development and the progression of atherosclerosis to heart attack.”

Now researchers provided first in-human evidence that treatment of a known inflammatory condition with biologic therapy, a type of drugs that suppresses the immune system, was associated with a reduction in coronary artery disease, in particular of rupture prone plaque which often leads to a heart attack.

Psoriasis, a common skin disease affecting 3-5 percent of the U.S. population, is associated with heightened systemic inflammation, which elevates risk of blood vessel disease and diabetes.

Inflammation occurs when the body's defensive mechanism kicks in to ward off infection or disease, but this mechanism can turn against itself when triggered, for instance, by excess low-density lipoproteins (LDLs) that seep into the lining of the arteries.

The resulting inflammatory response can cause blood clots, which block arteries and can lead to heart attack and stroke. Inflammation puts 20-30 percent of the U.S. population at risk for these kinds of events.

People with inflammatory diseases such as rheumatoid arthritis, systemic lupus erythematosus, and psoriasis have a much higher rate of cardiovascular events.

The current findings came from an observational study of the NIH Psoriasis Atherosclerosis Cardiometabolic Initiative cohort, which had 290 psoriasis patients, 121 of whom suffered moderate to severe skin disease and qualified for the biologic therapy approved by the U.S. Food and Drug Administration.

For a year, researchers followed the eligible patients, all of whom had low cardiovascular risk, and compared them to those who elected not to receive biologic therapy. Study results show that biologic therapy was associated with an 8 percent reduction in coronary artery plaque.

“The findings that intrigued us most were that coronary plaque sub-components changed over one year, including the necrotic core and non-calcified components, which are the culprits for most heart attacks,” Mehta said.

Prior research had linked psoriasis with premature development of high-risk coronary plaque. Now, Mehta's team has shown beneficial changes in this plaque when psoriasis is treated with biologic therapy – even without changes in other cardiovascular risk factors such as cholesterol, glucose, and blood pressure.

“This appears to be an anti-inflammatory effect. In the absence of improvement in other cardiovascular risk factors, and without adding new cholesterol medications, patients' soft-plaque still improved. The only change was the severity of their skin disease,” said Mehta.

Researchers say continued research will need to be done to confirm whether this is so, or whether the positive effect is a result of treating the underlying inflammatory disease.

“Our data are observational so the next steps should be randomized, controlled trials,” concluded Mehta.

About the National Heart, Lung, and Blood Institute (NHLBI): NHLBI is the global leader in conducting and supporting research in heart, lung, and blood diseases and sleep disorders that advances scientific knowledge, improves public health, and saves lives. For more information, visit http://www.nhlbi.nih.gov.