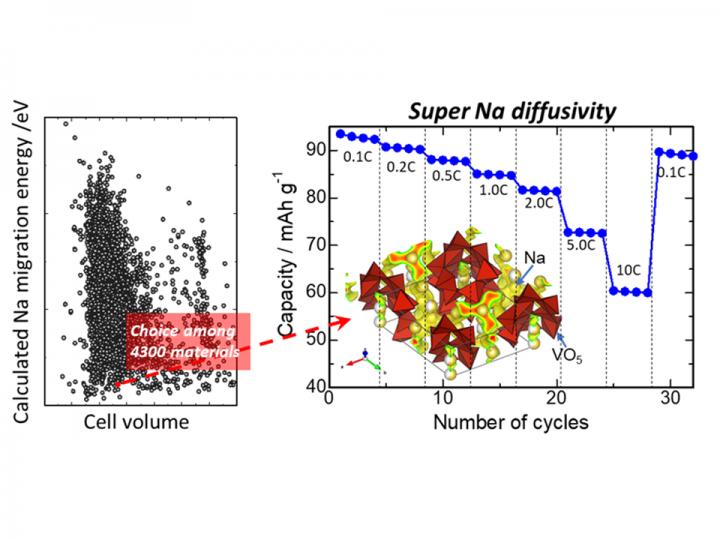 A high-throughput computation for Na migration energies is conducted for about 4,300 compounds in the inorganic crystal structure database, which the compound indeed exhibited excellent high-rate performance and cyclic durability; in detail, the compound exhibits stable 10C cycling, which corresponds to the rate of only six minutes for full charge/discharge, and ca. 94 percent capacity retention after 50 charge/discharge cycles at room temperature. These results are comparable with or outperform representative cathode materials for sodium ion batteries. Credit: NITech

The findings were published in Scientific Reports in November of 2018 and was headed by Naoto Tanibata, Ph.D., an Assistant Professor at the Department of Advanced Ceramics at NITech.

The popular lithium-ion batteries have several benefits – they are rechargeable and have a wide application spectrum. They are used in devices such as laptops and cell phones as well as in hybrid and fully electric cars.

The electric vehicle – being a vital technology for fighting pollution in rural areas as well as ushering in clean and sustainable transport – is an important player in the efforts to solve the energy and environmental crises. One downside to lithium is the fact that it is a limited resource.

Not only is it expensive, but its annual output is (technically) limited (due to drying process). Given increased demand for battery-powered devices and particularly electric cars, the need to find an alternative to lithium – one that is both cheap as well as abundant – is becoming urgent.

Sodium-ion batteries are an attractive alternative to lithium-based ion batteries due to several reasons. Sodium is not a limited resource – it is abundant in the earth's crust as well as in seawater.

Also, sodium-based components have a possibility to yield much faster charging time given the appropriate crystal structure design.

However, sodium cannot be simply swapped with lithium used in the current battery materials, as it is a larger ion size and slightly different chemistry. Therefore, researchers are requested to find the best material for sodium ion battery among vast number of candidates by trial-and-error approach.

Scientists at NITech have found a rational and efficient way around this issue. After extracting about 4300 compounds from crystal structure database and following a high-throughput computation of said compounds, one of them yielded favorable results and was therefore a promising candidate as a sodium-ion battery component.

“Our aim was to tackle the biggest hurdle that large-scale batteries face in applications such as electric cars that heavily rely on long charge durations. We approached the issue via a search that would yield materials efficient enough to increase a battery's rate performance”.

Despite the favorable characteristics and overall desired impact on sodium-ion batteries, the researchers found that Na2V3O7 underwent deterioration in the final charging stages, which limits the practical storage capacity to the half of theoretical one.

As such, in their future experiments, the researchers aim to focus on improving the performance of this material so that it can remain stable throughout the entire duration of the charging stages. “Our ultimate goal is to establish a method that will enable us to efficiently design battery materials via a combination of computational and experimental methods,” Dr. Tanibata adds.

The article “Nanotube-structured Na2V3O7 as a Cathode Material for Sodium-Ion Batteries with High-rate and Stable Cycle Performance” was published in Scientific Reports in DOI : 10.1038/s41598-018-35608-9.