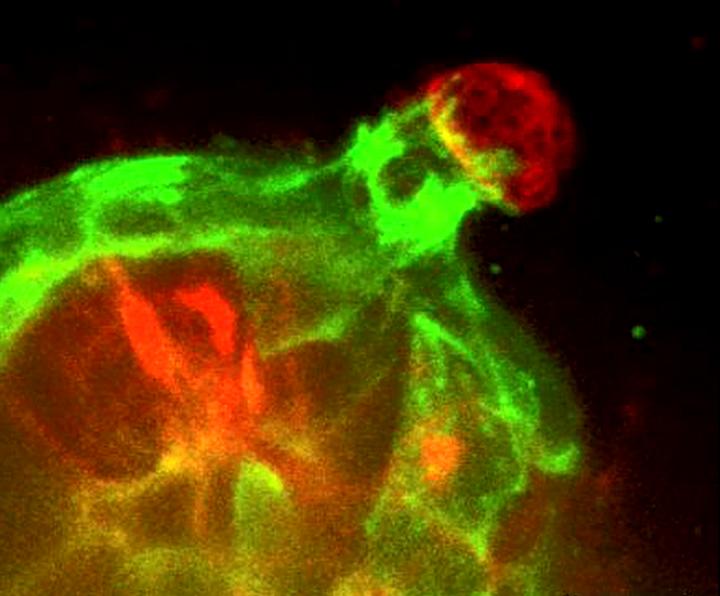 Results of the scientists' experiments are published online July 30, 2018, in the Journal of Cell Biology.

“Understanding how cancer cells are contained could eventually help us develop ways to predict a person's individualized risk of metastasis,” says Andrew Ewald, Ph.D., professor of cell biology at the Johns Hopkins University School of Medicine and a member of the Johns Hopkins Sidney Kimmel Comprehensive Cancer Center.

Most breast tumors begin in the cells that line the interior of breast milk ducts. These cells in turn are surrounded by myoepithelial cells, Ewald says, which work together to contract and move milk through the ducts when a baby is nursing.

“If you think about metastasis as a long race, breaking through this layer is the exit from the starting gate,” says Ewald.

For their study, Ewald and his team engineered cells taken from the lining of mouse breast ducts to produce the protein Twist1, which works by altering gene expression and which has been linked to cancer metastasis in multiple tumor types.

To their surprise, the researchers saw that when the invasive Twist1 cells broke through the myoepithelial layer, the myoepithelial cells grabbed the cells that had gone astray and successfully pulled them back within the breast duct lining 92 percent of the time through 114 observations.

“These findings establish the novel concept of the myoepithelium as a dynamic barrier to cell escape, rather than acting as a stone wall as it was speculated before” says Katarina Sirka, a Ph.D. student from the Ewald laboratory.

To confirm that their findings were active behaviors, Ewald and his team altered two key characteristics of myoepithelial cells — their ability to contract and their numerical ratio to the invasive cells.

First, the researchers genetically engineered mouse myoepithelial cells to deplete their smooth muscle actin, a protein that allows the cells to contract. Under that condition, the number of escaped invasive cells that broke through the myoepithelial layer increased threefold compared to control cells with a normal myoepithelium.

“This is important to know because it suggests that both the physical completeness of the myoepithelium and the gene expression within the myoepithelial cells are important in predicting the behavior of human breast tumors. Anywhere this layer thins or buckles is an opportunity for cancer cells to escape,” says Eliah Shamir, M.D., Ph.D, who is currently a surgical pathology fellow at the University of California, San Francisco.

In the future, Ewald and his team plan to study the cellular mechanisms prompting the myoepithelial layer to react so dynamically and what makes it fail during invasive progression.

Click here to view the video that accompanies this release.