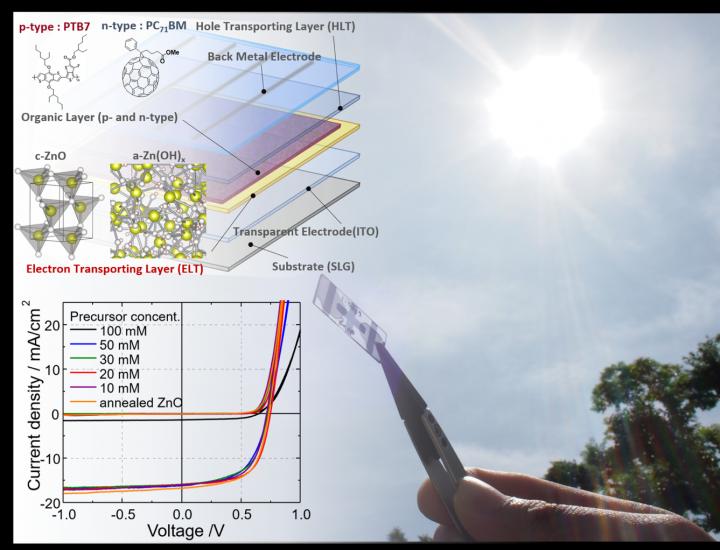 As environmental and energy issues have become increasingly aggravated in recent years, photovoltaic (PV) cells are drawing attention as a new energy source. However, since the cost of silicon PV cells is still high, it's important to reduce the cost of PV cells. On the other hand, organic photovoltaic (OPV) cells using organic compounds have several advantages: they are lightweight, flexible, and sophisticated, and their production cost is low. For these reasons, they are anticipated as next-generation PV cells.

As for the development of OPV cells, in addition to organic semiconductors that absorb light, (1) materials for buffer layers in OPV cells (buffer layers, or OPV inter-layers, that efficiently separate electrons and holes produced from light energy and transport electrons and holes to each electrode and (2) the design of OPV devices are actively being studied. In these circumstances, one of the techniques that grabs the most attention is a spin coating technique to create Zinc related oxide (ZnOx, ZnOHx) ultra-thin films (ceramic films) using a solution.

A joint group of researchers from Osaka University and Kanazawa University developed a technique for coating Zinc related oxide (ZnOx, ZnOHx) simply by depositing the films in a solution process using the Metal Organic Decomposition (MOD) method at ambient temperature and pressure without a heating process. They also demonstrated that their thin films produced by this technique were useful as buffer layers for OPV cells and that the films achieved a power conversion efficiency (PCE) equivalent to that of ZnO thin films produced by conventional methods involving sintering. Their research results were published in Scientific Reports.

One of the authors Tohru Sugahara says, “We succeeded in forming nano-sized oxide ultra-thin films by our blended solution coating method without heating.”

The thickness of this ultra-thin film can be controlled in the range of 5 – 100 nanometers. They created OPV cells using this film making technique, achieving the highest PCE under the use of an ultra-thin film of about 20 nm. This technique not requiring heating in the forming process of ZnO thin films will be able to drastically reduce the production process and cost.