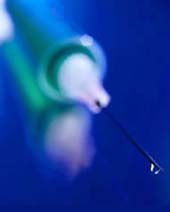 Inadequate vaccines can the encourage emergence of nastier bugs, placing the unprotected at risk, a new mathematical model shows. The effect could undermine future vaccination programmes.

Many vaccines save people from dying of a disease, but do not stop them carrying and transmitting it. Over a few decades this may cause more virulent strains to evolve, predict Andrew Read and his colleagues of the University of Edinburgh, UK1.

In some situations, such as in areas endemic for malaria, deadlier disease strains could kill more people than vaccination saves. “Most of the time the benefits [of vaccination] will be eroded,” says Read.

Vaccines for HIV, and hepatitis B and C “give most cause for concern”, says immunologist Charles Bangham, of Imperial College in London. These viruses are difficult for the body’s immune system to eradicate, leaving them time to reproduce and evolve. Tearaway strains of flu also emerge regularly and evade existing vaccines.

Infections that linger in the body are more likely to meet a second bug, explains evolutionary biologist Dieter Ebert from the University of Fribourg in Switzerland. The competition drives pathogens to evolve faster, nastier killing tactics to get the most from their host.

Vaccines that encourage evolution include those that slow a disease-causing organism’s growth or target its harmful toxin. These types are being pursued to fight diseases such as anthrax and malaria. The possibility that these might save individuals but harm populations “has not been considered before”, says Ebert, and should be a factor in public-health policy.

Most existing vaccines, such as those for smallpox, polio and measles, are very effective as they use a different strategy. They stimulate a natural immune reaction which either kills off subsequent infections or blocks pathogen reproduction and transmission altogether. Read does not advocate halting such programmes. New vaccines should similarly aim to prevent pathogens getting a toehold, says Bangham; many in the pipeline do not.

Several different vaccines are being developed to fight malaria: results of clinical trials for one that interrupts the life cycle of microorganism Plasmodium falciparum were announced last week2. ’Multivalent vaccines’ that target several different parts of a pathogen or life cycle at once are the better choice, Read suggests.