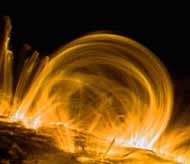 The Sun’s violent outbursts have deep and twisted origins.

These coronal mass ejections (CMEs) cause the aurora, seen at the Earth’s poles, and can knock out spacecraft. An understanding of what drives CMEs may one day make them possible to predict.

Radar aboard the NASA/European Space Agency spacecraft SOHO allowed a team from Stanford University in California to look beneath sunspots – dark patches on the Sun associated with CMEs.

Sunspots have been studied for centuries, but were thought to be exclusively a surface phenomenon. The researchers find that they in fact extend at least 100,000 kilometres below the Sun’s surface. “This is the first evidence that their roots go deep into the interior,” says team member Alexander Kosovichev.

An examination of another sunspot by Junwei Zhao, also of Stanford, reveals magnetic field lines beneath the surface twisting around one another into bunches as the sunspot forms. “A huge amount of energy builds up in these bunches,” says Zhao. When released, this would trigger a CME hurling solar material into space.

Sunspots had been observed rotating before, says Richard Nightingale, a solar physicist at Lockheed Martin in Palo Alto, California. “The coupling of above and below – that’s all new,” he says.

“The interior of the Sun was simple before there were data,” says Philip Scherer, who led the research. Models of the Sun’s interior assumed that buoyant hot material rose to the surface, where it was whipped up by the magnetic field lines that criss-cross the star’s exterior, forming sunspots and leading to CMEs.

Now it appears that material rising from deep within the Sun can twist magnetic field lines, giving them more energy. “Convection is being converted into magnetic fields,” says Scherer.

This may produce the giant loops of overstretched magnetic fields that arch out of sunspots. The snapping of these loops releases energy, causing CMEs. Why the processes occur at specific locations is still a mystery.

The structure below the surface is currently too complicated to predict accurately, according to George Fisher, who models the Sun’s behaviour at the University of California at Berkeley. More data from sunspots may reveal patterns in the rising solar material and their interactions with magnetic field lines. “In about five years’ time we should be able to model some kind of real events,” he says.

Fisher aims to use data from SOHO and future missions to model the Sun’s magnetic field completely. Then he hopes to be able to spot CMEs stirring within the Sun and to forecast the resulting weather in space.