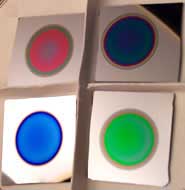 A microelectronic sensor may alert doctors to bacterial hazards.

Smart bandages could soon alert doctors to the presence of certain bacteria in a wound by glowing different colours. Researchers in the United States have created a tiny device that emits faint light of two colours in response to two types of bug1.

Benjamin Miller, of the University of Rochester in New York State, and colleagues hope that a refined sensor might ultimately generate an instant and easily recognizable array of colours that signify dangerous or antibiotic-resistant strains. So far, the device produces only a very small colour change, which is not detectable with the naked eye.

Currently, the faint glow alters only in the presence of ’Gram-negative’ bacteria. Most bacteria are either ’Gram-positive’ or Gram-negative; a dye called crystal violet stains Gram-positive bacteria blue-violet and Gram-negative bacteria red. This staining procedure was discovered in 1884 by the Danish biologist Hans Christian Joachim Gram and is still used today to distinguish the two cell types.

Differences in the chemical composition of the bacteria’s cell walls cause the dye to be taken up differently. A consequence of these differences is that Gram-positive bacteria are more susceptible to antibiotics, so the test can still be useful for treating infections.

Miller’s team hope to replace the cumbersome staining procedure with a simple process that registers the difference instantly and in situ. To develop the sensor, the team collaborated with Philippe Fauchet, also at Rochester, a specialist in silicon-based light-emitting devices.

Researchers like Fauchet are primarily interested in making silicon glow, to render light-based fibre-optic telecommunication compatible with silicon-chip micorelectronics. Silicon is usually a very poor light emitter, but it can be persuaded by etching it with acid to give it a porous, sponge-like structure.

Fauchet and the team found that, when Gram-negative bacteria stick to the surface of porous silicon, the colour of the light emitted changes slightly. The researchers make the silicon attract Gram-negative, but not Gram-positive, bacteria by coating it with specially designed molecules that hook chemical groups only present on Gram-negative microbes.

The team is now searching for molecular hooks that are specific to individual families of hazardous bacteria, such as Salmonella and Listeria.