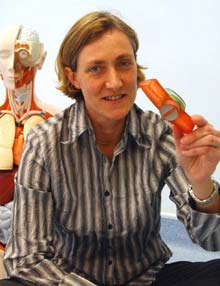 A revolutionary device that could protect asthmatics from stifling air pollution has gone on show at the Science Museum. in London.

The PUREbreathe, a plastic device containing high tech filters to be worn in the mouth, has been unveiled as one of the star exhibits in the Science of Sport exhibition, the Science Museum’s latest blockbuster exploring the world of sport [which opened on Friday, February 13].

Sport scientist Dr Alison McConnell a researcher at Brunel University, in Uxbridge, Middx, teamed up with product designer Johannes Paul from the Royal College of Art to make the anti-pollution device that would be easy to use, recyclable and pleasing on the eye.

Athletes and other people who exercise outdoors are more vulnerable to the damaging effects of air pollution because they inhale greater quantities of air more deeply into their lungs.

“Paradoxically, people who want to cycle in the city to keep fit and healthy and to be environmentally friendly by not using a car, are, often forced to go back to using their own cars because the pollution makes them feel so unwell; it’s bit of a ‘Catch 22’,” said Dr McConnell.

“PUREbreathe is designed to help urban exercisers, especially asthmatics, who are very sensitive to pollution, to exercise safely and comfortably.”

PUREbreathe is different from masks worn by cyclists in the city, which, says, Dr McConnell, are “uncomfortable and retain the heat, so the face becomes sweaty.” Furthermore, she says, the filter becomes damp, “making them less efficient and difficult to breathe through.”

Designer Johannes Paul added: “The challenge for us was to design a product which not only solved these problems but also looked good. The PUREbreathe is made from low energy recyclable materials and is comfortable to wear.”

The inventors are currently seeking a company to licence the product, which Dr McConnell hopes will be on sale by the end of the year. The device could retail for as little as £20.

Dr McConnell is also the inventor of the award-winning POWERbreathe, which is designed to help people, from the infirm to elite athletes, exercise the muscles around their lungs. It was exhibited in the Millennium Dome as one of a thousand top inventions.

“The biggest kick for me is walking into a good sports shop for the first time and seeing the display stand for POWERbreathe,” she says. “It still gives me a buzz,” she laughs.