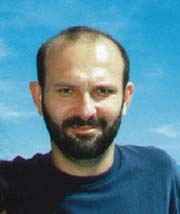 Researchers at the University of California, Riverside have developed a device that speeds the detection of a virulent strain of botulism neurotoxin from hours or days to minutes, making treatment or vaccination more effective.

Botulinum neurotoxin B, one of five strains that are known to be toxic to humans, is targeted in the paper that appeared in the Nov. 11 issue of the Proceedings of the National Academy of Sciences. The paper’s authors included UC Riverside Professor of Cell Biology and Neuroscience Vladimir Parpura and Umar Mohideen, a professor of physics, both part of the Center for Nanoscale Science and Engineering at UC Riverside; graduate student Wei Liu; staff researcher Vedrana Montana; and Edwin Chapman, a professor of physiology at the University of Wisconsin, Madison.

Given its rapid detection and small size, the device, known as a micromechanosensor, will find applications in medicine, in the war against bioterrorism or in the food industry, Parpura said.

“Of course a good deal of testing needs to be done first,” Parpura said. “What we’ve done is shown proof that the principle works.”

The principle, he added, works much like a fishing pole and line. A protein-coated bead at the end of a microscopic cantilever comes in contact with the neurotoxin, which cuts through the protein strands connecting the two, much like a fish would cut through a fishing line. The bead’s separation causes the cantilever to vibrate, announcing the neurotoxin’s presence. While effective, the process is not yet ready for practical application.

“Right now the issue is that it’s linked to an atomic-force microscope, an expensive piece of equipment, which means it cannot be used on a widespread basis,” Parpura said.

However, he holds out hope that the process could soon be put into wider practice to detect one of the most potent toxins known to man. The Centers for Disease Control and Prevention in Atlanta list botulism as one of the six most dangerous bioterrorism threats. Other such bio-threats include anthrax, plague and smallpox.

“The important thing to note is that the technique is very general and, in the future, can be done without the use of the atomic-force microscope. This also means that it will find uses in fields outside (medical) toxin sensors,” said Mohideen, adding that the process can be used in food and water quality applications.

The key to the process, however, is its timeliness, according to the researchers. Antitoxin vaccinations can work only if applied quickly, before the onset of symptoms. Symptoms of food-borne botulism intoxication frequently take from 12 to 36 hours to develop, according to the CDC.

“When you think that we’ve cut the detection time from a few hours or a couple of days, down to a few minutes, that’s what’s important,” Parpura said. “The shorter the detection time, the more time you have to treat people and that makes a great deal of difference when dealing with this neurotoxin.”

“We are working on approaches to further reduce the detection time and substantially improve the sensitivity,” Mohideen added.

Botulism, while rare in the United States, is considered a medical emergency in which roughly 10 percent of those afflicted die. Those who survive may take weeks or months to recover and frequently undergo intensive hospital care with extensive use of ventilators.