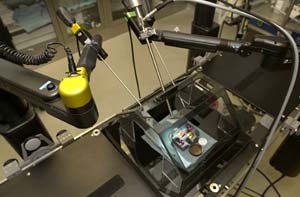 Although a casual observer in the operating room at Cedars-Sinai Medical Center on Oct. 8 could have been pardoned for initially believing that the surgeon was playing high-tech video games, he was actually performing the nation’s first Zeus® robotic system-assisted gastric bypass surgery. Zeus, manufactured by Computer Motion, is a multi-armed, highly evolved robotic system for computer-enhanced surgery.

The patient, Kim Kishi, was released from the hospital on Friday, Oct. 11, just three days after surgery, and went back to work the following Monday, Oct. 14. The surgery was performed by Theodore Khalili, M.D., a general surgeon and director of research for Cedars-Sinai’s minimally invasive surgery unit.

Just two weeks after her surgery Kim, a floral designer says, “I can’t believe how good I feel. I had the operation on Tuesday, went home on Friday and was back to work on Monday. My face is already slimmer and my clothes are very loose. I could be the poster child for this type of surgery.”

“This is a brand new and very exciting field,” says Dr. Khalili. “Ultimately it will result in safer, quicker operations and in a faster recovery time with less discomfort for patients. The surgeon sits at a console controlling the hand instruments,” he explained. The robotic camera is voice controlled and magnifies the surgical field so that the surgeon can “zoom in” on a particular point of interest.

The benefits are that Zeus can repeat the surgeon’s hand motions with great precision and without fatigue or tremor. It is important to note that the equipment does not replace humans but, instead, enhances certain human functions that are improved by the use of robotics. This allows trained staff to better utilize their skills in the operating room setting.

“The surgeon is at the command post, like a pilot,” explained Achilles Demetriou, M.D., Ph.D., Director of Cedars-Sinai’s Department of Surgery. “Some of the controls are voice activated to dim lights, change positions, and other functions. The doctor has his or her own prerecorded card imprinted with their voice commands, so the voice recognition system is individualized for each surgeon.”

With the robotic arm integration, the physician can voice command: “Camera, move right. Move left. Go to Position Two.” Also at the physician’s fingertips is computer access to the hospital information system, allowing patient data to be accessed right in the operating room. The surgeon can upload X-rays and CT or MRI scans for reference, and even log onto the Internet to consult with another physician.

Cedars-Sinai introduced robotics about 18 months ago in its first modernized operating room suite, primarily used for spine procedures. The second redesigned room, which houses Zeus, is used for an array of surgical cases performed by general surgeons, urologists, cardiac surgeons and pediatric surgeons.

Not only does this reinvented operating room increase efficiency and economy, it also expands the opportunities for minimally invasive surgical procedures, offering patients more and better treatment options.

Although Kim admits to initially being a little apprehensive about being the first person in the country to have the Zeus robotic-assisted procedure, she believes strongly that robotics are the way of the future for surgical procedures such as hers.

“It’s like the difference between a sewing machine and sewing something by hand,” she says. “The doctor is still in control, but the robot assisted him in internal suturing, resulting in a very fine incision which is barely noticeable. I don’t feel like I’ve even had an operation.”

Cedars-Sinai Medical Center is one of the largest nonprofit academic medical centers in the Western United States. For the fifth straight two-year period, Cedars-Sinai has been named Southern California’s gold standard in health care in an independent survey. Cedars-Sinai is internationally renowned for its diagnostic and treatment capabilities and its broad spectrum of programs and services, as well as breakthrough biomedical research and superlative medical education. Named one of the 100 “Most Wired” hospitals in health care in 2001, the Medical Center ranks among the top 10 non-university hospitals in the nation for its research activities.